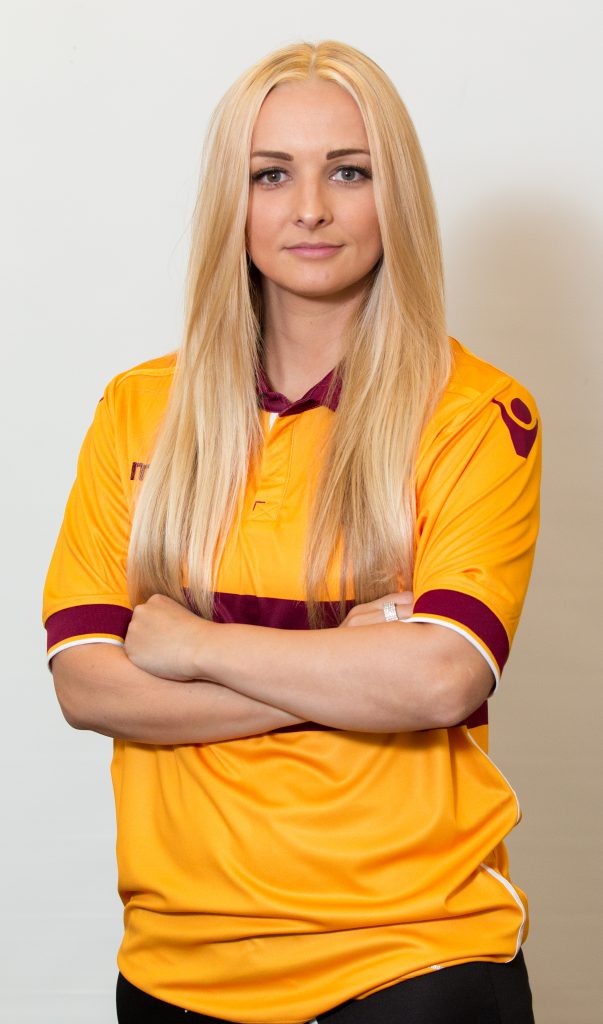 With over 100 caps for the Scottish national side, the arrival of Suzanne Grant at Fir Park was an incredible coup for the Motherwell ladies team.

From playing football in a boys’ team until the age of 17 to playing with, the most successful side in English ladies football, Arsenal, Suzanne has enjoyed a fantastic career at the top-level.

After spells with Ross County and Inverness during her youth career, she moved on to Glasgow City where she netted a hat-trick in their 5-1 thumping of Aberdeen in the Women’s Cup final.

A move to Hibs brought more success, winning the domestic treble in 2007 and 2008. Suzanne was a pivotal part of this success and was suitably rewarded with a move to the highest level.

“Playing for Arsenal was a great experience and probably my career highlight, when you are growing up that’s the level you aspire to – the level was fantastic,” Grant explained.

“Julie Fleeting, who is one of my best friends in football was already at the club which helped me out, although there were things that were difficult as well.”

During her time with the London club, Suzanne faced a battle to find a balance between football and family life.

“I had to fly down to London to train and play every week and I didn’t get to know the ladies as well as a result. It’s also difficult when you aren’t there as much and are walking into the team on a Sunday,” Suzanne remembered.

“It was a hard decision; I had hit my peak as a player but the woman’s game wasn’t as well-backed financially as it is now. I couldn’t just give up my life and move to London – my husband was also playing professionally and I had a full-time job, it would have been too much to give up my life, that’s why I chose to fly down every week.”

In 2009, Grant was presented with the opportunity to return home when Celtic presented her with an offer that she couldn’t refuse.

The issues brought with balancing football, work and family life meant the time was right to return to Scotland.

“Celtic made a really good offer and the chance to play my football in Scotland again was too good to turn down. I knew a lot of the girls at Celtic and fitted in well,” the 32-year-old recalled.

“Women’s football is so different to the men’s game. They train, play and pick up their wage packet at the end of the week, it isn’t as simple in our game – it was the right decision to come back to Scotland.”

Netting on over 100 occasions for Celtic, Suzanne’s time at the club was an undoubted success story.

Football however, became secondary following the birth of her son Oscar in November 2013.

There were plenty of teams interested in signing Grant following her return to the game, but it was the approach of Motherwell that caught her attention.

She wasted little time in making an impact, scoring an incredible 11 goals on her debut – a game which ended with a 21-0 victory for ‘Well.

Suzanne admits she has been impressed by the hard work and dedication of the club’s Community Trust – who have worked tirelessly to ensure funding and success for the woman’s team.

“I was out of the game for seven months and despite having a few offers there weren’t any that were the right move for me – Oscar is my main priority now,” she explained.

“At first I wasn’t sure about stepping down the league, but the move has worked out great for me – Motherwell is probably the most professional club that I have worked at.

“There was a lot of expectation and pressure on me, particularly after having returned following having a child. I was nervous going into my first game, but it went great – I scored most of my season target in that one day!

“Motherwell is a fantastic club, they are fan run and focused on the community. Everyone is so supportive, when I joined the club presented Oscar with a strip with ‘Mama 99’ on the back – touches like that mean so much.

“They are understanding of me being a mother and that’s a huge thing. I enjoy going into training, it’s a great bunch of girls and we have a great team spirit.

“The Community Trust do a great deal of work behind the scenes, there is a misconception that we take the men’s budget but that’s absolutely not the case. We are not there to compete with the men – we should all be working together.

“It isn’t like Glasgow City who aren’t affiliated with any other team, we rely on the Community Trust and it’s been a real eye-opener to see the work that they do.

“The response has been great, you meet players from the men’s team and they comment on how well we are doing – it’s fantastic to see they are looking out for our results.”

While women’s football is clearly on the rise, the game has faced challenges battling against stereotypes and scepticism.

Many have suggested making Motherwell Ladies’ fixtures more accessible would help enhance the reputation of the game, however Grant admits it’s sometimes difficult to host games at Fir Park.

“We understand that the men’s team is the priority and the standard of the pitch has to be maintained. I don’t know if playing two games in two days on the pitch would do too much damage but the groundsman may disagree,” she said.

“It’s up to the club to decide on that, we are close to the end of the season so I don’t think I’ll have the chance to play on Fir Park this season.

“We aren’t going to get fans going along to see games that finish 21-0, but that doesn’t represent the standard we can play to. We look good to win promotion this year to the second-tier and that will be a better challenge without being disrespectful to some of the teams we are playing against just now.”

Another step forward for the women’s game was the excellent success of the national side in securing qualification for next summer’s European Championship in Holland.

Grant was delighted to see the success of Anna Signeul’s side, but admits she holds no aspirations to return to the national side.

“Seeing the girls qualifying was great and I like to think that myself and a number of the more experienced players had a role in that success. These girls can now make a living from football and that’s fantastic progress,” said Grant, who scored 13 times for Scotland.

“I couldn’t consider international football now that I am a mum, but it won’t stop me from enjoying the tournament – I’ll be flying over to Holland to support the team.”

Despite having no intentions to return to international football, Suzanne has little intentions to turn her back on the game altogether.

She has already secured her coaching badges, but has no plans to finish her playing career anytime soon.

“I was brought up in a tiny village up north, I played football with a boys’ team right up until the age of 17 – I’ve had a great career and really enjoyed it.

“I want to be at Motherwell for as long as my legs allow, I have done all of my coaching badges, but I feel like I’ve got a few more years playing in me.

“The future is bright at Motherwell, I want to play a part in the continued rise.”