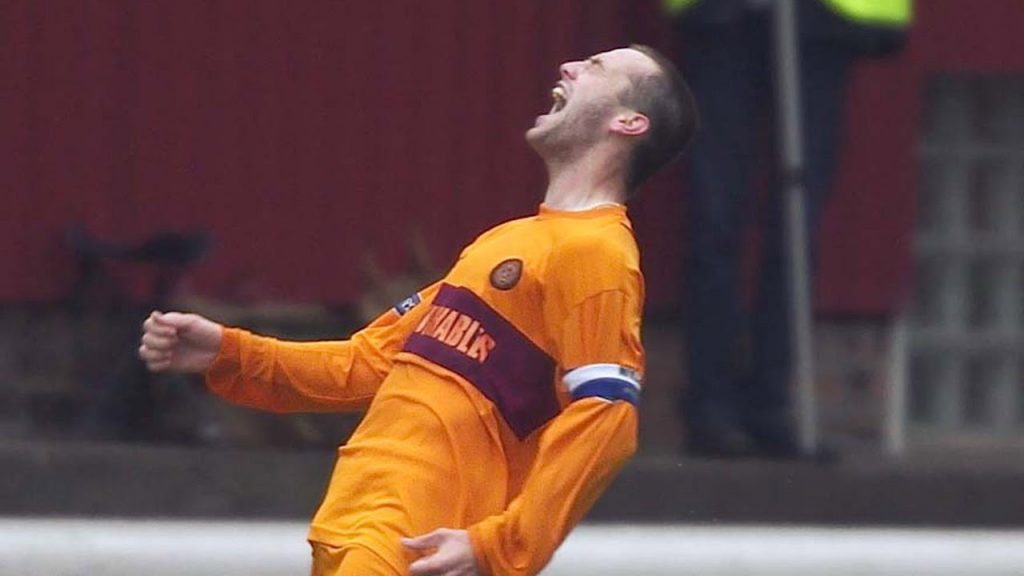 It was an end of season dead-rubber, but the match between Motherwell and Livingston at Fir Park in May 2003 is a fixture that ‘Well fans still remember fondly.

The 2002-03 campaign was an exceptionally difficult one for Terry Butcher’s young Motherwell side, but they would end it on a delightfully unexpected high note.

After the announcement that Motherwell had entered interim administration in April 2002, Butcher replaced Eric Black as manager. A week later the scale of the task facing the Englishman became clearer when 19 players departed Fir Park in what was described as ‘brutal savings’ in order to preserve the very existence of the football club.

Butcher’s hand had been forced in regards to throwing in a number of young players over the course of the season and despite battling valiantly, defeat to Aberdeen in the penultimate game of the campaign confirmed the Steelmen would finish bottom of the table and as a consequence faced dropping out of the top flight for the first time since 1985.

Heading into the final game of the season, the match was very much secondary. In the background there was becoming an increasing likelihood that Falkrik’s attempts to ground-share with Airdrie would be denied, casting doubt on whether they would be able to take Motherwell’s place in the SPL.

In addition there was also increasing speculation surrounding James McFadden’s future at the football club. The 20-year-old had enjoyed a fantastic year, netting 21 times in all competitions and he would have the final say as the curtain came down on an exhausting season for all involved at ‘Well.

Livingston made the journey to North Lanarkshire in ninth spot, 10 points clear of Motherwell, who had managed just a solitary point from their last 11 league matches.

It looked like Motherwell’s miserable form was set to continue when Lee Makel seized on a defensive lapse from Keith Lasley and then drilled home from outside the box to give the visitors the lead after 16 minutes.

Lasley would make amends for his error on the half hour mark when he glanced home David Clarkson’s pin-point cross to level matters. I’m happy to be corrected, but I think I can safely say this was Keith’s only headed goal during his Motherwell career in which he accumulated over 450 first-team appearances.

Colin McMenamin scrambled home from close range to restore Livi’s lead early in the second half, but again the young Motherwell team responded in emphatic fashion.

Steven Craig rounded Alan Main and blasted home superbly to level just three minutes after falling behind for a second time and when Clarkson saw his effort strike the post, McFadden was on hand to walk the ball into the net and put ‘Well 3-2 to the good.

Scotland boss Vogts was in the stand to take in the match and there was little doubt that McFadden was the man he was there to see. He was the undoubted talisman of the ‘Well team, every time he had the ball at his feet you felt something was about to happen, he played with great swagger and the fans loved it.

McFadden had been given a taste of international football and after making his debut against South Africa in the summer of 2002, he infamously missed his flight home. Opportunities with the national team had followed, though he had yet to cement his place within the Scotland setup.

The youngster had a point to prove and yet again he had the fans in raptures when he added his second goal of the game, audaciously chipping his penalty over the despairing Main. Fir Park responded with chants of ‘are you watching Berti Vogts’ and their enthusiasm only seemed to drive ‘Faddy’ on.

He completed his hat-trick after collecting the ball up just inside the Livingston half, gliding past a host of white jerseys before firing past Main. The goal sparked a mass pile-up among including every outfield player in the team, the stadium erupted – this goal wouldn’t change where the Steelmen would end up in the table, but everyone inside Fir Park knew they were witnessing something special.

There was still time for one more goal and if the mention of a Keith Lasley headed goal took you by surprise, the revelation that he would go on to score another later (this time from roughly two inches out) might come as an even bigger shock!

Motherwell prevailed 6-2, a victory that encapsulated a season in which many youngsters stepped up to the mark. There were plenty of disappointments over the course, especially in the horrendous run of form at the towards the conclusion, though a run to Scottish Cup semi-final, victories over Celtic, Rangers and a 6-1 mauling of Hearts demonstrated the immense talents within the squad.

The likes of Lasley, Clarkson, Steven Hammell, Stephen Pearson and Paul Quinn all would go on to have fantastic careers with Motherwell and beyond, though the 24 May, 2003 will always be remembered for the performance of one man.

McFadden was named Young Player of the Year for the 2002-03 season and three days later he would start for Scotland in a 1-1 draw with New Zealand. Less than a month into the 2003-04 campaign he would move to Everton for a fee of £1.25million.

From there his career continued on an upward trajectory and he would go on to demonstrate his talents to a wider audience at club level and on the international stage where he would be just as revered for a number of inspirational performances and famous goals such as the stunning winner against France in Paris back in 2007.

Two further spells at Fir Park as a player followed before taking up the position of assistant manager for the 2016-17 season, though arguably his finest hour in claret and amber came in a meaningless end of season encounter in which he demonstrated all of his very best attributes in an unforgettable display of class.