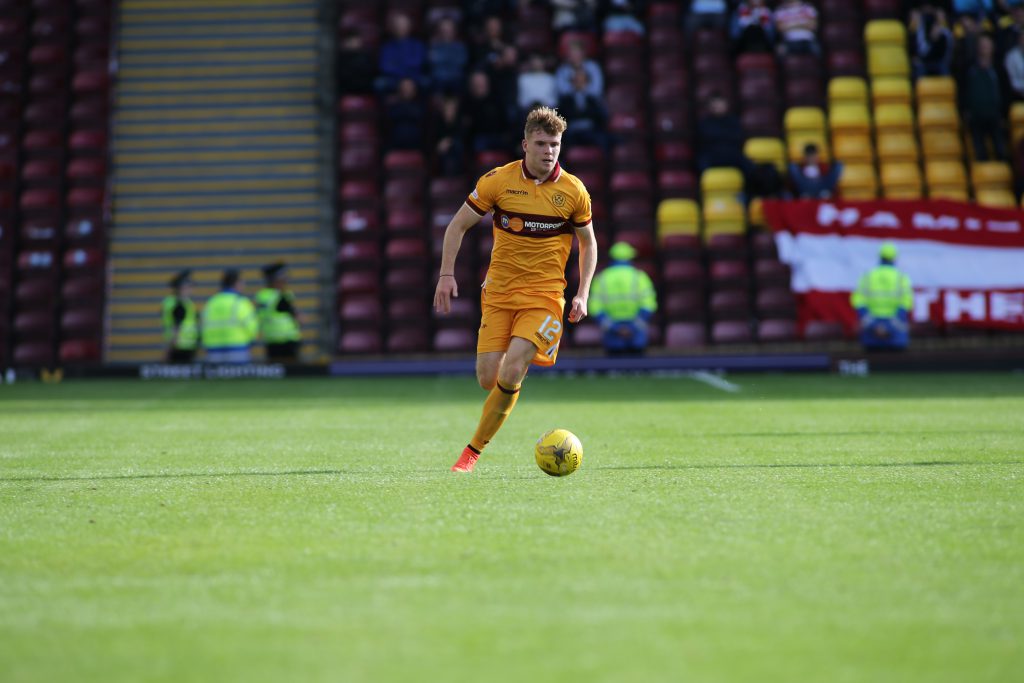 “A young lad came into the changing room when we played Accies looking for autographs, I noticed he had ‘Cadden 12’ on the back of his strip – that’s absolutely crazy, it’s the sort of thing you dream about.”

Chris Cadden has enjoyed a whirlwind 10-months in the Motherwell first-team and the 19-year-old doesn’t want the dream to end any time soon.

After a handful of cameo appearances in the Scottish Premiership, newly appointed manager Mark McGhee opted to thrust the youngster into a starting-berth in the 3-0 defeat to Ross County last November.

Although the result was far from what McGhee, Cadden or the rest of his ‘Well team-mates wanted, he has rarely looked back since.

“I would admit myself that in the Ross County game last year I wasn’t great – I had found out on the Friday night that I was playing and as a result didn’t have a great sleep,” Cadden reflected.

“I’m pleased that the gaffer threw me in though, it was a good experience.”

It would be a few weeks until Cadden would next reclaim a starting role, this time in a 3-3 draw with Lanarkshire rivals Hamilton at Fir Park.

From that point forward, the Bellshill born midfielder was almost an ever-present right up until the end of the season. 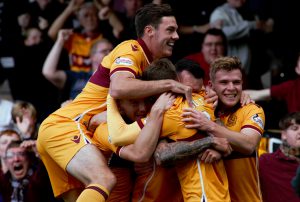 “At the start of last season the main aim was to win a new contract at the end of the season, but a big turning point came when Mark McGhee arrived. He took a liking to me and gave me a chance. Under Ian Baraclough I never really felt there was a pathway into the first-team,” he admitted.

“When he (Mark McGhee) arrived he reassured me there was a way into the team and gave me my chance, before then it looked like I would be going out on loan.

“The manager and senior lads in the squad have been priceless for me and I’m sure the other younger guys would vouch for that, the amount of games they have under their belt and the experiences they have is unbelievable. When I first started training with the first-team Stephen McManus would take me aside and give me advice and Las (Keith Lasley) talked me through my first games – I can’t thank them enough.

“I thought the main difference from playing in the under-20’s to the first-team was the tempo and playing against bigger and stronger players.

“Now three days a week I work with the club’s fitness coach Andy Boles. We focus on my strength and physique – I think both have improved a lot in the last six months and that’s helped me massively.

“I’ve got a huge amount of time for Bolesey (Andy Boles), he works with both the fit players and those that are injured. With Louis Moult recently he helped make him a plan to try get him back as soon and as healthy as possible.

“The last 10 months have been an absolute dream, it’s just kept going and I’m really enjoying it – it feels like the sky’s the limit at the moment.”

While playing in the first-team was the culmination of a great deal of endeavour from Cadden, the run of Stephen Craigan’s under-20s squad to the final of the Youth Cup presented the perfect opportunity to sign-off from youth football in style.

It was a chance he grasped with both hands, netting the second goal in a fantastic 5-2 victory.

“Winning the Youth Cup was unbelievable, especially given it was with a group of boys who were all so close.

“We went out together, held regular FIFA tournaments, it was one big bunch of friends and it made it that bit more special to win the cup with close mates.”

Cadden has little doubt that his former team-mates can make a success of their opportunities – despite their relative inexperience.

“You are always sad to see guys go, but on the other hand delighted for your mates. We still keep in touch and I’m sure they’ll do well,” he explained.

“Both Robbie and Ben have good positive attitudes and want to prove themselves – they’ve got the right mentality and an excellent work-rate to make it at a big club.”

There was little room for downtime with the re-structuring of the League Cup meaning players were back for pre-season earlier than usual.

Despite having a schedule unlike one he had ever experienced before, Cadden admits that he was desperate to get back to action after just a week off.

“At the end of the season you are always pleased to have a break, then you have a week off and suddenly you are bored in the house, desperate to get back to training,” he laughed.

“I always try to keep myself ticking over fitness wise and although pre-season obviously isn’t pleasant I just wanted to get back to a routine – this is the best job in the world.”

Along with the departures of Hall and Leitch during the close-season, former ‘Well assistant-boss Stephen Robinson also left to take up the reigns at Oldham Athletic and central-midfielder Stephen Pearson headed to India to join Atlético de Kolkata.

Both figures had a big influence on Cadden, however he has now set his sights on replacing the influential Pearson in the Steelmen midfield and admits he was delighted at the appointment of James McFadden as Robinson’s successor.

“I was sad to see Robbo (Stephen Robinson) go, he’s a great coach and he’ll do a great job at Oldham, however when the gaffer told us that Faddy (James McFadden) was coming back to be his assistant I was delighted,” said the 18-year-old.

“He has been fantastic with me throughout my time in the first-team and he still takes me aside and gives me pointers. Faddy has had a wonderful career and has worked with some great managers, I’ve learned so much from him. 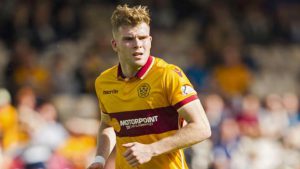 “Pearo (Stephen Pearson) was brilliant here, if you wanted to build a football player you’d build Stephen Pearson – he has everything you’d want in a midfielder.

“I sat down at the start of the season and targeted getting as many goals as possible, it would be great to be classed as a ‘goal-scoring midfielder’ as you don’t get many of them.

“The recruitment in the summer has given us a lot of strength in depth, if we start being more clinical we’ll be flying. If we play well we can be a match for anybody, what we need to find is that consistency.”

In early September, Cadden was to receive more plaudits for his excellent displays when he received a call-up to the Scotland under-21 squad.

It had seemed that boss Ricky Sbragia had initially overlooked the midfielder, however he did eventually receive a much deserved call following another excellent showing against Dundee in late August.

Cadden’s debut ended in a disappointing 4-0 defeat to Ukraine, however the experience has done nothing but wet his appetite for more chances and the youngster is desperate to build on his first cap.

“It was a proud moment for myself and my family. When I didn’t get the call-up initially it was nice to see the gaffer and a few others backing me – my Twitter really blew up too,” he recounted.

“The result wasn’t great obviously, but it was a real honour and one that I won’t forget in a long time.”

A massive influence on Chris’ career has been his father Steve who previously turned out as a player at Fir Park.

“My dad has been the main reason that I’ve got to where I am, he’s driven me countless hours to training and matches. He played with Motherwell and then Albion Rovers and Alloa, he’s a massive influence on me.

“Now he keeps my feet firmly on the ground and it’s good to come home to a guy who knows what he’s talking about – the Scotland call-up was his hard work as well as mine.”

A number of excellent performances will surely have Cadden on the radar of other clubs, but he’s quick to maintain his focus is firmly on Fir Park.

“I’m loving every minute of my football just now; I want to play as many minutes as possible and add goals to my game – it’s my first full season here and I want to make the most of it.”