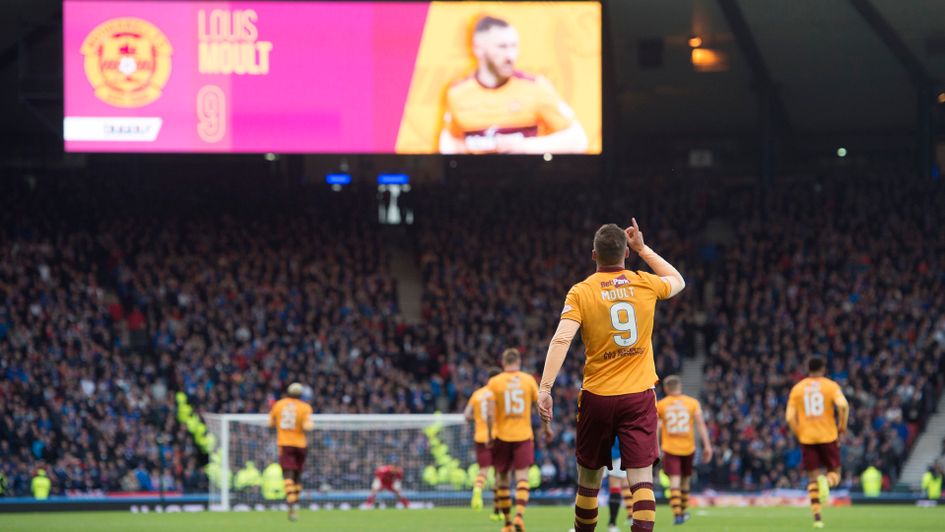 Monday 1st September 2003, a date that I will never forget, the day that James McFadden left Fir Park to sign for Everton.

It was news that was hard to accept, our idol was headed for pastures new – a player who had progressed through the youth ranks at the club and thrilled supporters with his talent, desire and goals – it was a loss that was tough to take.

Never did I think that an older (certainly) and wiser (debatably) Andy would feel the same feeling of loss over 14 years later, that a player would have achieved similar levels of acclaim and idolisation – yet today it has happened again.

Louis Moult arrived at Fir Park to very little fanfare, despite the positive reports from Wrexham fans; Motherwell supporters could have been forgiven for not lining the streets to welcome the relatively unknown striker to Fir Park.

“When I found out Motherwell were interested it was a shock, a little bit of the unknown. I was so settled at Wrexham at the time, it was only 30-40 minutes down the road from my family, but when a club like Motherwell comes calling though it is too good to refuse – I took the gamble and thankfully it has paid off,” Louis explained in the MFC Podcast’s ‘Off-Air 3’.

“I don’t think I could have moved to Scotland on my own. I have said that to my missus – I’m so grateful of how supportive she has been of my football career. She is the one who told me ‘Lou you can’t turn this down’ when Motherwell came calling, that was unbelievable when you think we were moving far away from home – she has enjoyed herself here, which takes the pressure off a bit, but I couldn’t have done it without her.”

It’s fair to say the gamble paid off and in some style – what an impact the striker made in his two and a half seasons at the club. 18 goals in each of his two full campaigns – if it wasn’t for his contribution it is almost certain that the club’s fantastic record of 32 years in the top-flight of Scottish football would have certainly have been ended.

The highlights – where do we start? There was the double in the 2-1 victory against Celtic at Parkhead in December 2015 – a result that remains Celtic’s last home defeat in the league. Or what about that goal against Aberdeen where he nipped ahead of Mark Reynolds and fired home, celebrating before the ball had even reached the net?

Into the second season and there was SIX goals against Accies, including four in the one game and the winner at New Douglas Park which effectively sealed Motherwell’s Scottish Premiership status. Or what about the third campaign where he notched a double in the quarter-final of the Betfred League Cup and then again in the semi-final, securing our passageway to the final in sublime style.

“I managed to score quite a lot of goals in my first season and I think those two against Celtic were the highlight. To go there and beat them, at the moment that’s basically unheard of – we did it and it was an unbelievable achievement for us,” Louis recalled.

“I remember in my first game at Hamilton, the manager told us we hadn’t won there for five or six years and we couldn’t believe that and were determined to turn things round. We lost the game, but last season we were unbeaten against them and have beaten them already this season.

“The four goals against them on my first start since my operation was unreal, something that I might not ever do again – although obviously I hope I do. The one on Hogmanay – what a feeling – it was a scrappy game, we were one down, the last touch of the game and it ends up in the net, I was uncontrollable for about 10 minutes as were most of our lads. Craig Samson ran the length of the pitch to join in the celebration and I had sore knees from my knee-slide on the astro for weeks, but those scenes are what it’s all about. 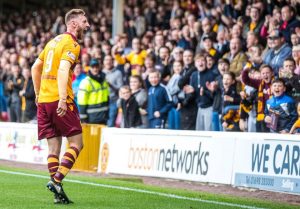 “I’d say the feeling of the equaliser probably overshadowed the ‘shoulder goal’ in the game at the end of the season, but that one was obviously a lot more important – I have good memories of the Lanarkshire Derby and the goal where the Motherwell fans are.

“The boys thrive on the derby, I know what it means to sit in the stand and watch a player give their all and how much it means to fans – that’s what I try to do, give my absolute maximum.”

Reflecting on those two goals to defeat Rangers at Hampden (an occasion he’s since described as the highlight of his time at Fir Park) Louis added: “We went unbeaten in the group stages and were dominant through to the knock-out stages. To then beat Ross County away and follow it up by beating Aberdeen at Fir Park was a fantastic night for the football club and the supporters who backed us so vocally.

“The semi-final, what an unbelievable feeling for everyone that was – for a few weeks after we were all buzzing. The way it happened, the result, the goal type – I couldn’t have asked for any more and the scenes after it were so special.”

I have witnessed many brilliant players pulling on a Claret and Amber jersey over the years, many of them have left the football club aiming for bigger and better things – it’s all part and parcel of supporting a smaller ‘selling club’. Yet few have I felt have shown the same devotion, passion and simply just ‘got’ the ethos of Motherwell FC in the way that Louis has.

Whether it was hospital visits, going along to watch a local kids football match, attending charity events and the countless occasions he has went out his way to help and support our podcast events – the way in which he carries himself demonstrates the class of the man and the patter of never meeting your heroes couldn’t have been further off the mark for any young Motherwell fan lucky enough to meet Louis Moult.

Only last month Louis was voted by the supporters as one of the club’s top-25 post-war players, further recognisation of the heights he has scaled since his arrival in the summer of 2015.

It speaks volumes that nobody raised an eyebrow following the announcment, Louis’ inclusion was absolutely merited and the fan reaction summed it up perfectly.

“I am very, very grateful to have been voted into the club’s top 25, there are some absolutely unbelievable players amongst the list – this means a great deal to myself and my family, we are all thrilled,” he said following the announcement.

“A massive thank you to the Motherwell supporters and ‘Always Believe In’.”

So again we bid farewell to a player that has established himself as a Motherwell hero, he will go with our blessings and no doubt many of us will follow his progress closely. The history of our magnificent football club has seen many great players go, many also return – the door will always remain open for Louis Moult. On behalf of the podcast team, thank you Louis for everything you have done for us and the memories you have provided on the park – we will never stop believing.