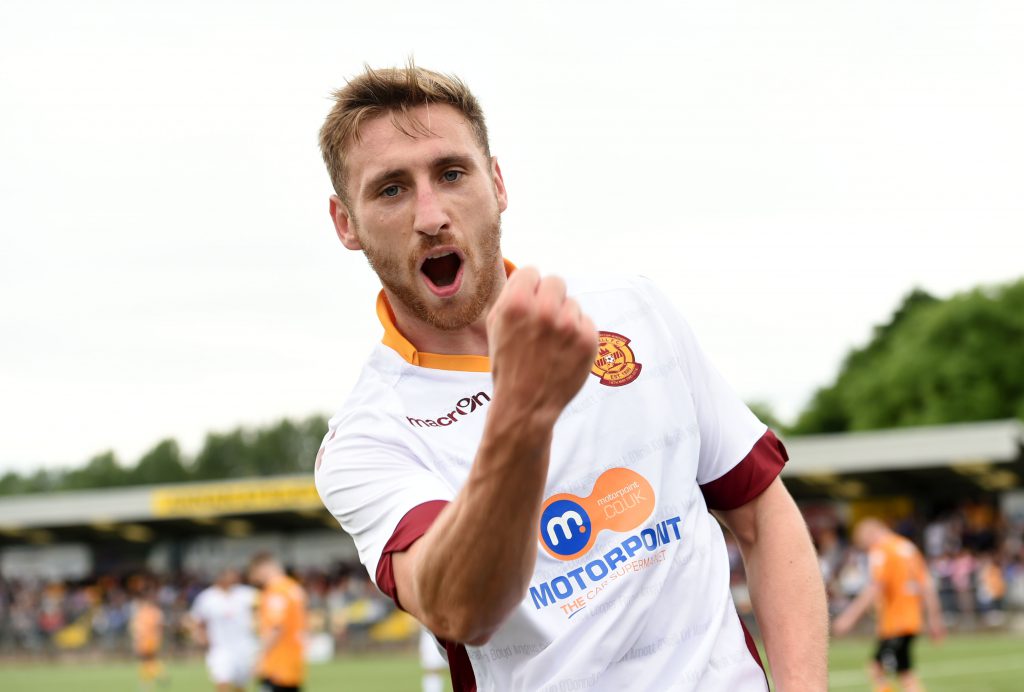 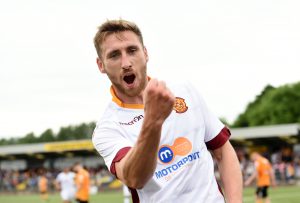 Louis Moult had just jetted out to Tenerife for a well-earned rest. The striker had made himself a Wrexham hero in just one year, netting 23 goals for the National League side, but it was time to switch off from football – even if only for a week or two.

But sometimes the stars align and life lets you know exactly where you should be heading – that was exactly what happened to Louis as he chilled out with his family at the hotel pool.

The ex-Stoke youth star had just had the season of his life and the footballing Gods had a message to send him, even if his phone was switched off.

“Towards the end of the season my agent rang me and said ‘Motherwell are interested in you’, but I took it with a pinch of salt,” Louis said.

“I’d scored 23 goals so I had heard a few clubs mentioned and had loads of agents ringing me up saying, ‘they’re after you or they’re after you’. But the Motherwell one kept coming back and I remember the season finished and I went on holiday.

“We got to Tenerife I turned my phone off and left it in the room, we were there to relax with the family and my fiancé Carlie’s family.

“It was so strange, because when we were in Tenerife we got talking to a Scottish couple at the pool, I asked them where they were from, ‘Motherwell!’ they said.

“At that point, I have only ever heard someone talk about Motherwell when it was my agent. So when that happened I got back to the hotel room and my missus said: ‘did you hear where they came from?’ and I said: “Yeah, that’s a bit weird isn’t it?’.

“Now that was early on in the holiday and I didn’t turn my phone back on until I came back. When we got back I got to Manchester Airport, turned on my phone and had a tonne of missed calls and messages. So I thought I better read these – in the taxi on the way home I put a voicemail on loud speaker and it was my agent saying ‘Motherwell have put a bid in for you, it’s been rejected but they are going to put in another bid and it’s looking very likely’.”

He laughed: “It’s about 3am at this point and we are all in the taxi looking at each other, Carlie’s parents looking at me as if they wanted to kill me because they knew I was about to take their daughter away.

“Next minute I’m up here. It happened that quickly.”

“As soon as I got those messages I was like: ‘remember that couple!?’ I couldn’t believe it. I honestly think that was a sign. That can’t happen very often surely? I never told them I was a footballer or anything – I kept it quiet so we didn’t get onto football talk or anything but I just remember asking them where they were from and that was it.

“You know what? I have never seen them again. I always wonder if we’ll ever bump into them or if they maybe know who I am now.”

After the debut season Louis had with the Steelmen it would be surprising if he hadn’t been brought to the mystery couple’s attention.

Eighteen goals in one season is enough to make any striker a fans’ favourite, but Louis gives the Fir Park faithful so much more. Not only does he ooze class on the pitch, playing with a smile on his face and giving it his all for 90 minutes, but off the field he’s one of the most down to earth footballers you could ever meet.

Louis is genuinely delighted to be a Motherwell player and takes every opportunity to engage with the fans who have made him feel right at home since day one.

He’s a player who appreciates every kick of the ball he gets and he reckons that may be what has given him an affinity with Well fans, who he regularly engages with on Twitter.

“The way I look at it is the fans who tweet me take time out of their day to message me and watch me, and they pay good money, so I don’t see why I shouldn’t reply to them,” Louis said.

“I’m a human being and I appreciate all the support that I get. In the past I have been at places where no-one would tweet me, no-one knew who I was, so I am so grateful for having that little bit of interest from people. If I‘m being honest I get a right buzz off it, I love it.

“At some clubs you will get players saying ‘don’t worry about the fans, they’ll all turn on us’ but I haven’t seen that at Motherwell. There were parts of last season where you looked at the table and thought ‘we could get dragged into that at the bottom’ but not once did the fans start booing and saying horrible stuff.

“They were right behind us from the get go. I think that stays in everyone’s heads. It stuck with me for sure, I went through a period of not scoring and the fans didn’t turn on me, they always sang my song.”

There is no doubting Louis’ talent, he’s proven it time and time again at Well, but in 2012 his world came crashing down when he was released from his boyhood side Stoke City.

The 24-year-old had been in and around Tony Pulis’ first team and was desperate to make it with the Premier League side, but it wasn’t to be and he soon found himself signing for League Two side Northampton town.

But after a year Louis once again found himself a free agent, a move which almost led him to hang up his boots at just 21.

He revealed: “I think it takes a lot of rejection to realise how lucky you are. Some people don’t realise what they have got because they have never had to deal with that rejection.

“But at that stage I was arrogant, I would go out drinking, I thought I was the best player in the world but I grounded myself again by signing for Nuneaton part-time, working my way back up and it’s got me to where I am today. I will never forget what’s got me here and that was hard work.

“Maybe the fans can relate to me a little bit, I am that guy who will just run around as much as I can, maybe more so than I should do. But I am like that because I very nearly dropped out of the game.”

For a year Louis juggled playing for Nuneaton with stripping wallpaper and painting bathrooms. He was delighted to be back playing football but soon found himself with a family to support and he knew he wanted more from the game.

He said: “At one stage I was in the Premier League with Stoke City and the next I was a painter and decorator playing in the Conference part-time and getting a trade.

“I was getting the train to play Thursday, Saturday football. You get in at God knows what time.

“That’s probably an easy life compared to some, but it grounded me and made me the person I am today. It just makes me want it that little bit more and I think that the fans can see that.

“At one point I thought ‘wow, how am I going to live like this?’ That’s when it hit home and I knew I had to pull the finger out. It was finding out that Carlie was pregnant that changed everything.

“I was at Nuneaton at the time not on great money and I thought ‘I’m going to have a family now’ – I had to focus. Part of football is making money, it becomes your job. The responsibility of having a baby on the way made me switch on.

“For me the happiness of my family always comes first.”

Following a successful spell with Nuneaton, Louis found himself at Wrexham where he was an instant hit. His time in Wales has left a lasting impression and he insists the similarities between the two communities helped him to settle in Scotland.

He said: “The Wrexham fans were brilliant, I had an unbelievable season there. I think I scored 23 goals and the reaction from the fans was very similar to what I have got now, very similar. They were so passionate, just like Motherwell, so passionate about their football and about their hometown.

“I am so lucky to have come to Motherwell and love my football again because it’s very rare that that happens. There will be a lot of footballers out there who don’t enjoy playing football, I had that in the early parts of my career. But I am so happy to be sitting here now speaking about how much I love my football.

“I have so many great moments, scoring the two at Celtic was incredible and beating them 2-1 at their place. You couldn’t write a better script.”

He joked:  “Well you could, I could have scored three!

“As a career highlight, those four goals against Hamilton have got to be up there.

“What an afternoon – I was buzzing just to start, once the gaffer said the team and I knew I was in there I was ready straight away. It’s always good to score but to score three goals in 13 minutes is something else. My phone has been red hot since then and my fiancé has been at me for replying to everyone, but it was a really good afternoon for me and for the football club as well.

“As soon as I came off the pitch Alan Burrows told me that it was the first time in 25 years a Motherwell player had scored four goals in a game.”

He said: “I remember last season we were playing Cove in the Scottish Cup and the gaffer put out his strongest starting 11.

“I think that showed the intent. I remember just walking past him one day and him saying ‘a couple of goals tomorrow and let’s have a cup run’, I know for a fact the gaffer is dying to win the cup or get to a final with Motherwell. I know all the lads are. I think that’s the one thing missing now.

“Before I came, Motherwell won the play-offs, then we made it into the top six. Now let’s finish in the top six and win the Scottish Cup – why not win it? It’s definitely there for us and we want it.

“I was blown away by the passion more than anything when I came to Motherwell. It is crazy. Before I moved to Scotland I had never been here in my life, just to see the passion from everyone, it fired me up even more.

“As soon as I got a little run in the team and started putting in a few goals I started feeling this way. As soon as I felt the connection with the fans and they started singing my name I got that buzz. That will never leave me.

“I am loving my football and when that happens you play your best stuff so let’s see where it can get us, not just me but Motherwell as a whole.”