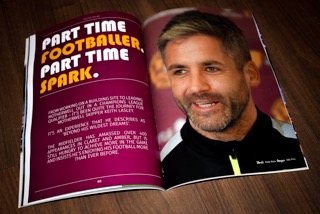 From working on a building site to leading Motherwell out in a Champions League qualifier – it’s been quite the journey for Steelmen skipper Keith Lasley.

It’s an experience that he describes as ‘beyond his wildest dreams’.

The midfielder has amassed over 400 appearances in claret and amber, but is still hungry to achieve more in the game and insists he’s enjoying his football more than ever before.

“It’s been beyond my wildest dreams how things have worked out for me, particularly given the circumstances in which I got into football. I was working on a building site and felt like the chance to have a career in football may have passed me by,” Lasley told the MFC Podcast ‘Off-Air’.

“By that point football was certainly secondary to work for me and I did have serious doubts. Billy Davies spotted me at my boys’ club training a few weeks before he took over at Motherwell and must have saw something in me – I played in a few reserve games and actually scored a few goals. 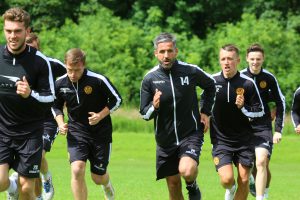 “There were a lot of things to consider, I was leaving steady employment in a trade for the uncertainty of football. Financially I signed a contract on less money than I was earning as a fourth-year apprentice.

“It took a bit of getting used to, I was used to working with big characters but this was a different ball game – I had watched many of these guys in the pub just a few weeks earlier. I think it took me a wee while to feel like I belonged.

“As I hadn’t come through the academy, I found getting to the required fitness level the most challenging element, I believe that’s the reason for me being a better player later on in my career.”
Keith made his ‘Well debut in a 2-0 defeat to Rangers at Ibrox in December 2000 and managed to establish himself as a regular in the first-team.

Following the club being placed into administration in 2002, Lasley and a number of other young players including Steven Hammell and James McFadden were handed first-team opportunities, an opportunity which he believes the youngsters may not have been given if it were not for the financial difficulties at the club.

“Administration was a big part in many of the younger guys getting their chance. So many teams were operating with 20-25 senior professionals along with a number of young players who struggled to get many opportunities,” he explained.

“It’s a bit different now as, with the Well Society, I feel like I have more appreciation for budgets – back then we only really knew what we were reading in the papers. It was a difficult time, there was a lot of uncertainty and it came at a time where we were just making our way in the game.
“There was a list of names posted on the dressing room wall and we had all been allocated a time-slot to see an administrator and find out whether we would still be in a job.

“I don’t think there’s any doubt that it was a difficult time for everyone involved. It did, however, open the door for the younger guys, the majority of the guys who got their opportunity wouldn’t have had that chance if it wasn’t for administration.

“Of course it helps you appreciate the better times. However, many years down the line you think of playing in Europe, cup finals and finishing in second-spot – we had to work very hard to reach that level.

“It’s amazing how moments build up, there’s been so many fantastic moments here.”

By 2006, Lasley’s consistency brought him to the attention of a number of clubs on either side of the border.

In the end, he would depart for Plymouth Argyle on a free transfer, which presented him with the chance to play in the English Championship.

“Thinking back it’s the first time I remember there being transfer interest in me. My form was consistent and I think I’d got to the stage where I had a reputation,” explained the 37-year-old.

“I had a great time at Plymouth, made good friends and experienced playing in a different country. When I heard of the chance to go to Plymouth I felt it was too good to turn down, it wasn’t as much to play for Argyle but the chance to play in the Championship.

“Initially I was playing regularly against the likes of Norwich and Sunderland, fantastic stadiums and a very high calibre.

“When the manager changed I wasn’t playing as regularly and as a footballer you don’t want to be sitting on the bench and so in that respect it ultimately didn’t work out for me, but I did come back a more rounded player for sure.”

Just like with his chance meeting with Billy Davies in 2000, Lasley’s return to Fir Park came as a bolt from the blue.

After two weeks training with Kilmarnock, he looked set to put pen-to-paper with the Rugby Park club, before receiving a call from Motherwell boss Maurice Malpas.

“It was out of the blue for certain, I had been training with Killie for a few weeks and the day before I was due to sign I got a call from Maurice Malpas,” he said.

“As soon as the call came in the decision was made. I phoned Jim Jefferies and explained my decision, he was fantastic with me and understood why I had chosen to return to Motherwell.”

With over 400 games and 15 seasons to look back on, Keith isn’t short of fond memories.

Despite that he does admit to feeling some frustration at not having had the chance to sample cup success with the club and revealed it looked like his time at the club was going to come to an end for a second time under Jim Gannon.

“I think it’s frustrating that we haven’t won a trophy, I think I speak for every Motherwell fan when I say that,” the midfielder said.

“It’s not been without its successes though. I was speaking to Alan Burrows the other day and he was mentioning that I’ve played 20 European games – I think it’ll be a period that’s looked back upon fondly.

“I could rhyme off a number of great memories and it’s been incredible to be a part of. Motherwell Football Club has brought a great deal of joy not just to me but to my family as well.

“Between coming back in 2006 and 2008 I had some good times – especially in the first six months after Mark McGhee took over.

“The next season was a bit up and down and then Jim Gannon took over and it looked like it was time up. 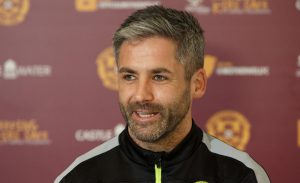 “Under Gannon I didn’t feel I got the respect that I deserved and it wasn’t just myself that happened to. It looked like I was going to go out on loan to Queen of the South, but after he left and Craig

Brown took over I was given a fresh chance – I enjoyed some of my best times in the next two or three years.”

Another real high for Keith was being rewarded for his fantastic service to the club with his testimonial against Bolton in 2015.

The match ended with a Lasley goal, but not for Keith – instead it was his son Alfie (who was then just three-years-old) getting on the score-sheet.

“Having my testimonial last year was a very humbling experience, to have people go out their way to support you was just amazing. I’ll never forget how special the day was,” he smiled.

“The only strips on my wall are the one from my debut and mine and my son Alfie’s from the testimonial. He was a bit like his old man in the way he started to cry when he saw the goal – it’ll be a video that I dig out for his 16th birthday!”

Lasley put pen-to-paper on a new one-year deal with the club in the summer, ensuring his time at Fir Park will be extended until at least 2017.

In what seemed to be a rather drawn out process, there was some uncertainty as to whether he would remain at the club, although he insists he had no intention of leaving.

“It wasn’t as smooth as I thought it would be, but we got there in the end. I one-hundred-per-cent wanted to stay and I’m delighted that it’s the case,” said the ex-Plymouth man.

“Everyone knows my feelings for the football club, it’s a huge part of my life and I’m delighted to continue on again. I’m enjoying my football more so than ever and feel so thankful for the opportunity I have.

“I cherish every game, I know it sounds soppy and romantic but it’s true – I get more excited now about playing football than I did 15-years ago.”

While Lasley has yet to lift a cup in a playing capacity for Motherwell, he played a role in helping to the club’s under-20s side to the Youth Cup last season.

Working alongside Stephen Craigan, the youngsters enjoyed a sensational run to the Hampden final and on the big stage swept aside Hearts 5-2.

“It was brilliant to be involved in, the boys were absolutely brilliant and the final was just the icing on the cake,” Keith recalled.

“It meant as much as some of the successes I’ve had as a player, it was a different experience but a very enjoyable one – to see how many Motherwell fans made it along and the support they gave the lads was superb.

“I will complete my pro-licence in December, but I want to continue playing as long as I feel I can make a difference to the team.”