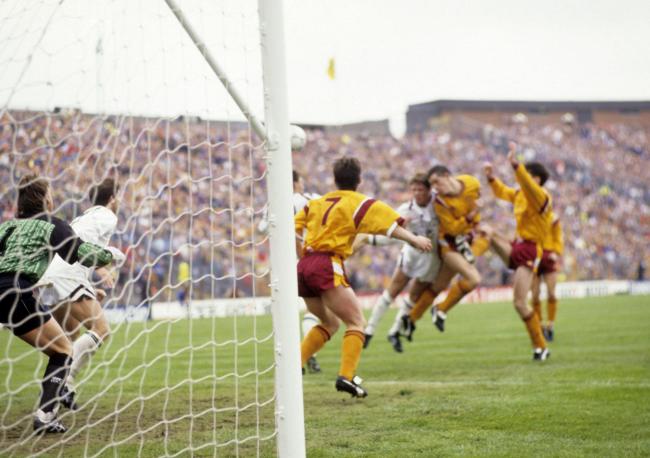 This afternoon’s fixture against Hamilton promises to be an emotional occasion as supporters honour the life of Phil O’Donnell.

On the 12th anniversary of his tragic passing, the legacy of our inspirational captain continues to burn brightly around Fir Park.

Last month he was posthumously entered as one of the first group of inductees into the Motherwell FC Hall of Fame – a fitting tribute to the joy he brought to ‘Well fans while wearing a claret and amber shirt.

Progressing through the ranks at Motherwell, Phil made his debut in a 2-2 draw against St Mirren in November 1990. By the end of that season he was playing a pivotal role as the Steelmen sampled Scottish Cup glory, throwing himself into a sea of flying boots to head the ball beyond Alan Main and put ‘Well 2-1 ahead.

It was a goal that encapsulated O’Donnell’s all-action style, he was full of energy and demonstrated an exceptional level of skill and ability. Phil was the youngest member of the 1991 squad and his determination, energy and enthusiasm inspired his team-mates.

“I think we were all pretty aware that Phil was a special kid,” he said. “That season he’d started in the reserves but he trained with us – you looked at him and thought, ‘who the hell is this?

“I always thought of him as a natural player. He hadn’t been robotically coached, he got from box to box on enthusiasm and energy.

“We’d guys like Davie Cooper and Stevie Kirk so we really needed to have legs in the team.

“But Phil was in the starting side on merit because of the way he’d been playing and the thing people forget about him was that he had real bravery.

“His goal in the final was his first for the club but, after Davie Cooper’s free-kick was headed back across the goal, he threw himself in among the flying boots to get his header in to make it 2-1.

“I’d got to know him quite well because a couple of times a week Tom Boyd, me, Jim Griffin and Phil would go for a game of snooker after training.

“He was the youngest of the lot of us and you could tell he was a genuinely nice kid.”

Phil’s stock value was rising and he would win the Scottish PFA Young Player of the Year award in 1992 before going on to win his first full international cap the following year when he replaced Dave Bowman in the 1-1 draw with Switzerland at Pittodrie.

Craig Brown, the Scotland manager who capped O’Donnell described him as “a perfect gentleman” and “an ideal role model”, insisting injuries deprived him the opportunity of becoming a mainstay for the national team.

“But for injury, I’m sure he would have had many, many more caps,” he said. “I think in his first spell at Motherwell he was probably the best box-to-box midfield player maybe not just in Scotland but in the UK.

“He was a Steven Gerrard-type of player, and he went to Celtic and that was no surprise.”

The 1993-94 campaign ended with another PFA Young Player award before the all too familiar tale of a young player bursting on to the scene, attracting great plaudits from the ‘Well supporters and then inevitably the attention of the bigger clubs with greater resources became reality.

At the age of 22, O’Donnell swap Fir Park for Celtic Park. Tommy Burns splashed out £1.75million to bring him to Parkhead and the fee remains Motherwell’s highest ever transfer fee received.

That season he would earn his second Scottish Cup winners medal, coming off the bench as Pierre van Hooijdonk’s goal earned Celtic a 1-0 success over Airdrie.

Three years later he earned his sole league winner’s medal as the Hoops denied Rangers a historic tenth successive title. During his time at Celtic, Phil would play 90 times, hitting the net 15 times.

Unfortunately, as with much of his career, injuries proved to be a challenge for Phil and after departing Celtic for Sheffield Wednesday he managed just 20 appearances, scoring only once.

After his release in 2003, there were suggestions that his career was over, though the chance to train with his boyhood club would provide a last chance at top-flight football.

It was an opportunity he grabbed with both hands, he would go on to captain the club and flourished in the role – he was now the rode model and the driving force for the young players within the squad.

One of my favourite memories of Phil in his second spell at Fir Park was his role in a 1-0 victory at Rugby Park, just over a month before his devastating passing. He put in a tireless shift that day and would contribute the winning goal of the game – a deflected effort that found its way past Alan Combe in the Killie goal.

He celebrated that goal with all the enthusiasm of his first ever goal for the football club, it was evident that he was enjoying his football every bit as much as he did during the infancy of his career.

The devastating events of the 29 December, 2007 will always be difficult to reflect upon. The football world instantly became worse off the day we lost Phil O’Donnell. His stature within the game was reflected in the tributes which came in from far and wide.

As fans it was difficult to know how to react, I think we all felt we had lost someone close to us. We’d witnessed Phil burst on to the scene, help inspire the team to Scottish Cup success and later return to captain a side that under Mark McGhee were playing some of the best football seen at Fir Park in many years.

Sadly, I never had the pleasure of meeting Phil in person. Though I’ve greatly enjoyed the company of those who knew the man affectionately known as ‘Uncle Phil’ and listening to their stories of a dedicated family man, who would do anything for his family, friends and his team-mates.

When writing this piece, I stumbled across an interview with Henrik Larsson, speaking ahead of Phil’s tribute match at Celtic Park in 2008 and felt it beautifully summed up his contribution to the game and his fantastic qualities as a person.

“You always have guys who are talkers in the dressing room and guys who are a bit more calm,”Larsson said. “Phil was a bit calmer but a great guy.

“For me coming over here as a foreigner, he was always someone you could ask a question and trust his answer – Phil was not only important for me, but for a lot of the foreign players.”

It wasn’t just the overseas players; Phil O’Donnell will always be a massive part of Motherwell Football Club. Today we celebrate his memory and offer our support to his family and friends on this incredibly difficult day.