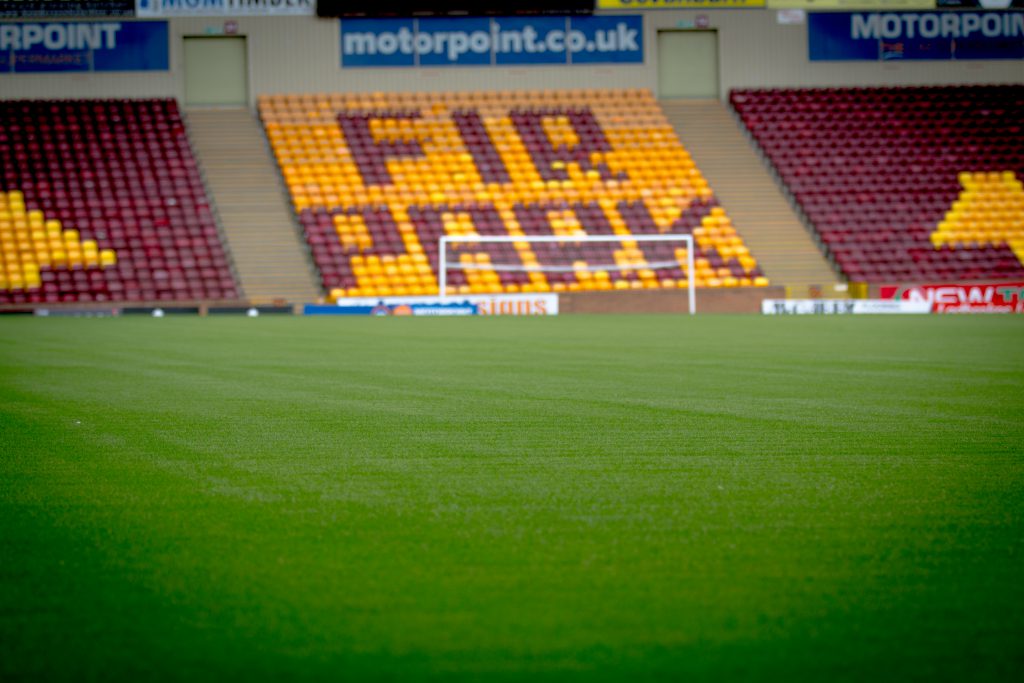 Stephen Robinson admits it has been a whirlwind return to Fir Park.

The Northern Irishman, who had previously worked as assistant to Ian Baraclough and Mark McGhee, was brought back to Motherwell in February, tasked with assisting McGhee in guiding his struggling side to safety in the Scottish Premiership.

However, in football nothing is straight forward.

Just over a week after his return, McGhee was sacked as boss and Robinson was placed in temporary charge before impressing the ‘Well board during the interview process – earning himself the managerial role on a permanent basis“It wasn’t what I envisaged, the plan was to come back for three months to help Mark (McGhee) out but obviously, that’s not how things transpired,” Robinson explained of the process.

“It’s a great honour to have got the job after going through the interview process and it’s now my aim to help guide the team away from trouble.

“When you are asked to take temporary charge it’s a difficult situation to deal with, the manager is gone and suddenly you are the one in charge – that’s football, unfortunately in the modern game and modern society everyone wants change, in modern football a manager losing his job is just part and parcel of the game, it’s all about how you deal with it and react to it.”

Robinson’s first task after taking temporary charge was to prepare the side for a crucial meeting with Kilmarnock. 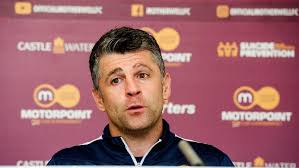 The Steelmen had slumped to an embarrassing 5-1 home loss to Dundee the week before, but showed tremendous resilience to bounce back and claim a 2-1 win at Rugby Park.

It was a result that Robinson believes helped give him confidence that he could land the job on a permanent basis.

“I think you always base things on the reaction of the players, how they react in training and do they have a reaction to you personally. In the games since I’ve been charge I think there’s been a massive reaction and the players have shown a great desire to win football matches.

“I’m very confident in my own ability, but ultimately it’s down to the players on the pitch and when you see their reaction to what you’ve tried to put in place that certainly drives you forward.”

A last-gasp Niall McGinn goal consigned ‘Well to defeat in Robinson’s second game in charge, but his side were a great deal more organised than in previous encounters with the Dons this season.

A few days later he was interviewed for the managerial position at the club and ultimately was chosen as the best of the five shortlisted candidates for the post.

A man renowned for his organisational skills, he is already putting plans in place for the future.

“I agreed to come back because I had a great affinity with the club, I then just set about making sure the team were prepared for the upcoming games,” Stephen said.

“We know we can’t change any personnel at this moment, but we know what we need to do and what we are missing, we’ll make sure the team are together and working as hard as they possibly can. 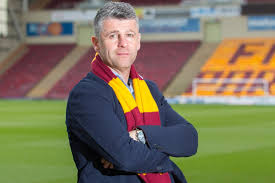 “The short-term vision is to stay up, then after that there’s a lot of tough decisions to be made in terms of who we keep and who we let go and the recruitment process.

“I do take a lot of the training and my aim is to make sure the team are organised, I did that under Mark too and we finished fifth.

“What’s the difference between this season and last season? Sometimes teams just lose their way a little bit and lose direction in terms of what they are doing. All I’ve done is simplify things and strip it back down again, ensuring everything is clear and I think the boys have responded to that.”

As well as looking to new recruits to bolster his squad, Robinson is also determined to continue bringing through young players at Motherwell.

Having coached the Northern Ireland U17s, U19s and U21s, he is highly experienced in developing young talent, but insists there has to be a fine balance.

“My background is in developing young players – 12 or 13 players that came through me from the Northern Ireland Under-17s played in the Euros,” he explained.

“There has to be a fine line between too many young players in the team and too little, we have to keep that Motherwell identity but ultimately, they also have to be good enough. You can’t have six young players in your first-team just because we develop young players.

“If we get one or two into the team a season and involve some in our training then that’s progress. Of course, if it’s a guy like Chris Cadden who has proven himself to be good enough then great, but you can’t put too many in at the one time or you’ll find yourself in a difficult situation due to a lack of experience.

“Stephen Craigan is one of my best friends in football and we kept in touch during my time away from the club, he’s developed his team really well. He’s realistic though, if you have 10 under 20s then all 10 aren’t going to break through at once.

“If you have one or two in the team at any one time then that is a success, I look at the other teams in Scotland and don’t see the numbers of young players playing a part on the scale of what we do – there’s certainly a heavy emphasis on youth and development.”

Robinson’s first-spell in Lanarkshire ended in July 2016, when he departed to take up the manager’s role at Oldham.

It was to prove a short stint, as financial circumstances provided an incredibly tough introduction to football management.

“I think difficult would be an understatement, I inherited three professional players and got the job three weeks after everyone else had started back for pre-season as I was at the Euros,” said the 42-year-old.

“We had three weeks to sign 23 players, I think Jose Mourinho may have struggled to have done that. 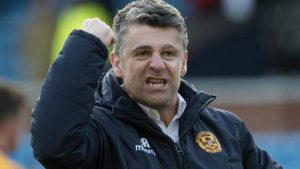 “The remit I was given was to keep the club up and we were three points off safety with two games in hand when I left, knowing that we needed a big January transfer-window.

“They brought seven players in during that window and it has uplifted their fortunes, which we always knew would be the case – in the summer we probably signed the best of what was left as most of the players had already been recruited and done well with it.

“There wasn’t any staff either, so we had to rebuild a football club, not just a football team and to do that in six months was extremely difficult. The fans were good with me down there and understood the circumstances, but you don’t get time in anything anymore – I won’t gripe about it or hold grudges though.”

One major lesson Robinson learned during his spell at Boundary Park was the importance of having time to work in the transfer market.

He is already assessing options for the 2017/18 campaign and while he is under no illusions as to the budget he is working with, believes that having a head start on Motherwell’s rivals in the market is vitally important.

“The difference between here and Oldham is at Oldham I was three months behind everyone else whereas here I have time. Of course, we don’t have millions of pounds to throw at players, we have one of the lower budgets in the league, but we have already begun our due diligence – our scouts are already looking at people.

I’ve got a good idea of the market down in England as does Martin Foyle our Chief Scout and we have a lot of contacts in Scotland too. I want a team full of enthusiasm with legs and pace, I think that’s the one factor that we’ve not had since Marvin Johnson left.

“We need to be ahead of the game, if we get into a battle over players with a Cetlic or a Rangers, a Hibs or a Hearts then we aren’t going to win – it’s important we do our recruitment early.”

While Motherwell find themselves in a battle at the wrong end of the Scottish Premiership table just now, Robinson knows how quickly things can turn around in football.

After narrowly escaping relegation via the play-off’s in his first season when assisting Ian Baraclough, Motherwell recovered in the following campaign to finish comfortably in fifth spot.

He then enjoyed a summer to remember with Northern Ireland at Euro 2016, with the ‘Green and White Army’ surpassing expectations and reaching the last 16.

When asked if he could pin-point why, despite seemingly have more resources, Scotland continue to toil at international level, he was keen to stress that a turnaround won’t happen overnight.

“It was a great 12 months, football is so up and down, you go from a manager getting sacked to a new manager coming in and finishing fifth in the table,” said the Lisburn-born gaffer.

“Getting to the Euros was a miracle for Northern Ireland, never mind reaching the last 16.

“We had 35 players to pick from, four of which were from the English Premier League, the rest were League One, League Two in England and players from the Scottish leagues – I don’t think the achievement has been dressed up as much as it should have been.

“It was an unforgettable experience, pitting your wits against some of the best teams, players and coaches in Europe.

“What I had when I was in charge of the younger groups was a manager who told me not to worry about the results – you can’t obviously do that at first-team level.

“I was told to get players through, we were pushing guys through early. I had lads of 16 in the Under-21s and we aimed to move them into the first-team squad very quickly.

“If you judge Michael (Northern Ireland manager, Michael O’Neill) on his first two years in the job, then he wouldn’t be in the job, but he was given time and those in charge saw his qualities.

“It doesn’t happen overnight and it was a five or six year process before we saw the fruits of that.”