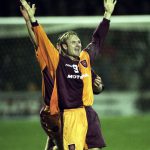 Eighteen-years have passed since Tommy Coyne departed Motherwell after nearly five magnificent years with the club.

Over that time the Republic of Ireland international forged the reputation as one of the most popular strikers to have ever played at Fir Park.

The fondness for Coyne amongst the Motherwell support remains although he admits that despite topping Scottish Premier League scoring charts during his first-spell with Dundee and then with Celtic, he had to prove himself all over again following his move to Lanarkshire in November 1993. END_OF_DOCUMENT_TOKEN_TO_BE_REPLACED