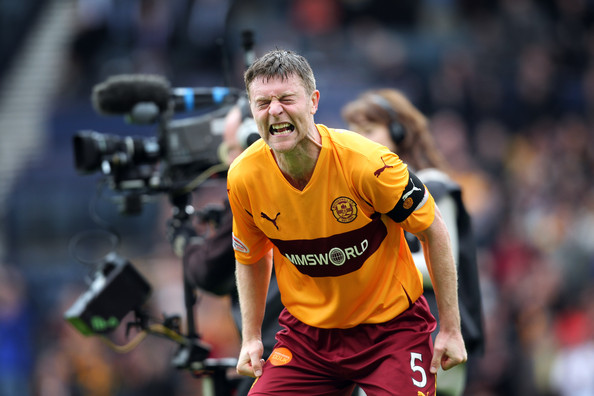 It’s been a memorable last 10 years for ‘Well fans. From the high of successive second place finishes, three cup finals and European adventures to struggles at the wrong end of the table.

Let’s countdown the 10 most memorable matches of the last decade.

After suffering late disappointment in the first-leg as the Norwegian side levelled from the penalty spot, it was all to play for one week later at Fir Park.

Ole Gunnar Solskjaer, who at the time held the post of reserve manager at Manchester United, was in the crowd to watch future signing Anders Lindegaard and he witnessed the keeper concede his third goal of the evening when Jonathan Page tapped home in the final minutes to seal progression to the final qualifying round for Stuart McCall’s exciting side.

In a semi final encounter billed as far too close to call, Motherwell sealed a place in their first Scottish Cup finalin 20 years with a blistering first half display.

Stephen Craigan headed the Steelmen in front after five minutes and his celebration after breaking the deadlock typified the passion that the ‘Well legend would demonstrate every time he pulled on a claret and amber jersey.

Jamie Murphy drove into the box and drilled a low effort into the bottom corner to make it 2-0 and before the break it was three when John Sutton found the net with a quite incredible dipping volley from 35-yards out.

At the time of writing it’s been over four years since Celtic last lost a league fixture at Celtic Park, that was when Louis Moult’s double gave Motherwell all three points in the East End of Glasgow.

Mark McGhee’s ‘Well side held firm in the opening 45, but fell behind to Nir Bitton’s deflected strike just after the restart. It looked like the Hoops were on their way to a routine victory, but instead they were stunned as the visitors responded brilliantly.

Moult slotted home after great work by Marvin Johnson to level matters and he would double his tally six minutes later from the penalty spot to turn the match on its head. Celtic piled on the pressure in the closing stages, but Motherwell weren’t to be denied a memorable victory.

European football was guaranteed by a sparkling performance against the champions in waiting at Fir Park. Gary Hooper opened the scoring, but Neil Lennon’s side were powerless to resist what would follow.

Keith Lasley combined with Henrik Ojamaa and the Estonian finished wonderfully, restoring parity before half time and Michael Higdon scored from the penalty spot to put Motherwell ahead.

Lennon had cast some doubt on Higdon’s PFA ‘Player of the Year’ nomination in the build up to the game and the striker sent the Celtic gaffer a message with his celebration after finding the net. The third goal arrived when Mikael Lustig’s clearing header rebounded off his own post and ended up in net after striking Fraser Forster on the back.

Despite a 3-1 victory at Ibrox just three days earlier, there were plenty of nerves as Rangers visited Fir Park for the second leg of their Scottish Premiership play-off.

A cagey first half did little to remove the tension, but Fir Park would erupt when Marvin Johnson’s deflected shot looped into the air and through the hands of CammyBell. As the famous commentary from Derek Rae described, ‘Fir Park was twisting, shouting, shaking’.

Lionel Ainsworth drilled home to put the game beyond doubt and the gloss was put on a quite brilliant few days at the end of a difficult season when John Sutton converted from the penalty spot – the last of his 79 goals for the club.

The only match on this list that isn’t a victory, though there can be little disputing the merit of including what was arguably the most incredible 90 minutes in Scottish football history.

Motherwell were dead and buried at 4-1 down and also at 6-2, yet they weren’t and Craig Brown’s men would clinch a draw in the most dramatic of circumstances. Anthony Stokes made it 6-2 for Hibs after 65 minutes, but 11 minutes later it was 6-5.

When referee Willie Collum pointed at the spot to award ‘Well a penalty, the clock read 87, substitute Ross Forbes stepped up to take it and he saw his effort kept out by former ‘Well keeper Graeme Smith.

It didn’t end there though, in the third minute of time added on, Lucas Jutkiewicz thundered home a volley from what seemed like an impossible angle, sparking wild scenes among the players and they eternal optimists within the support who remained inside the ground when all looked to be lost.

Motherwell under Stephen Robinson had already reached the final of the Betfred Cup during the 2017/18 season when they took on Aberdeen looking to make it a double.

They did so in emphatic style, quite simply steamrollering their way to a richly deserved victory over the Dons – a second 3-0 victory in a cup competition over Derek McIness’ side that season.

Richard Tait did brilliantly to square the ball for Curtis Main to knock the ball home for the opening goal and within two minutes Motherwell had established a position of command when Ryan Bowman reacted quickly after seeing his initial effort blocked to turn the ball into the net and make it 2-0.

After the break, Main added another when he seized upon Kari Arnason’s error before driving into the box and dispatching the ball superbly beyond Joe Lewis. The scenes of celebration at full-time showed just how much the win meant to fans and players alike as an incredible season continued at pace.

We’d become quite well versed on what to expect from these occasions. When it came to coming up against Rangers at Hampden, Motherwell just couldn’t get the job done.

Thankfully, nobody had filled Stephen Robibnson’s side in on the script and they produced a performance to defy the odds and book their place in the 2017 BetfredCup final.

The first half was one sided and much was owed to Trevor Carson in helping keeping Rangers at bay, though as the game went on it became increasingly apparent that it might just be our day.

That belief increased when Louis Moult found the net after Peter Hartley’s header had struck the crossbar and he the talismanic striker was at it again when he sent a sublime shot over the head of Jak Alnwick in the Rangers goal and into the gaping goal.

It’s one to watch time and time again – the silence as the ball leaves Louis’ foot, time seems to stand still and then the noise of the ball hitting the net, followed by an explosion of noise from the ‘Well fans – brilliant!

There’s little dressing up that as a footballing spectacle, this game was right up there with the very worst, though it was an occasion where the result mattered much more than the manner in which it was achieved.

Motherwell made the trip to Pittodrie knowing that anything less than a win would see them having to settle for third spot, though over the course of the 90 minutes it was the hosts would enjoyed the majority of both the possession and the chances.

A fairly dire goalless draw seemed inevitable as the fourth official signalled just one minute of injury time, but there was to be a late twist that would propel this match into Motherwell folklore.

Keith Lasley launched a free-kick from his own half that sailed over everyone inside the Dons penalty area and clattered the crossbar, an almighty scramble would follow before Craig Reid prodded the ball into the net and secure second spot for the Steelmen.

There were plenty of protests from the Dons players who felt that Jamie Langfield had been impeded by John Suton in the build-up, but their protests were in vain as the bumper travelling support soaked up a triumph that earned them second spot in the most dramatic of circumstances.

After successive second place finishes, the 2014-15 season was markedly different for ‘Well and the team would finish second bottom of the Scottish Premiership.

If they were to ensure their top flight survival, it would have to be done by overcoming Rangers in a two-leg play-off, with the first fixture taking place on a Thursday night at Ibrox.

All the build-up to the game surrounded Rangers competing their journey back to the top league of Scottish football, with some pundits predicting that Motherwell would be doing well to even be in the tie come the return leg at Fir Park.

The early exchanges of the match saw Rangers lay siege on the ‘Well goal, forcing George Long into a number of good stops. As time progressed, the visitors began to show signs of settling into the game and just before the half hour mark Lee Erwin’s deflected shot found its way past Cammy Bell and into the net.

Rangers were stunned and before half time it was 2-0 when Stephen McManus headed home from Marvin Johnson’s free-kick.

‘Well fans were delirious at half time, though that was nothing compared to when Lionel Ainsworth drove the ball home following a lightening quick counter.

Darren McGregor did get one back for the home side before the end, but it was a night that belonged to Motherwell and the 950 ‘travelling fans lapped up every single second of their first win at Ibrox since 1997 and one that gave the perfect platform to finish the job three days later.