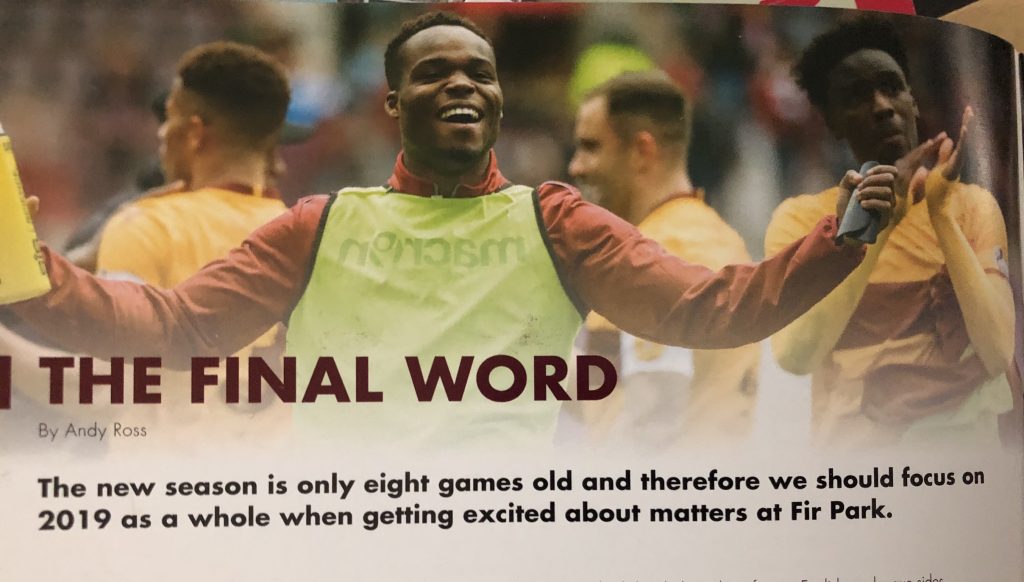 The new season is only eight games old and therefore we should focus on 2019 as a whole when getting excited about matters at Fir Park.

The majority of the 5101 crowd inside Fir Park left in high spirits; a 2-0 victory for Motherwell over St Mirren ensured they would head into the international break in third place, four points clear of today’s visitors Aberdeen.

Over the PA system, Phil Speedie speculated that the win had taken the Steelmen three points closer to Europe and social media speculation has went into overdrive that the ‘Well are going to win the league.

It’s been a really pleasing start for Stephen Robinson’s team and the fans have absolutely every right to be soaking it all up. There has been good football, great goals, plenty of excitement and as shown in the 1-0 victory at McDiarmid Park, an abundance of steely determination.

‘Well have won five of their first eight matches and have yet to experience defeat away from home.

A quick look back to this time last season and the contrast is substantial. The team would win just once in their opening nine games and had managed just a solitary victory – a 3-1 success at Dens Park against a Dundee side that were making bottom spot their own.

The frustration of a poor opening to the campaign was compounded by the quality of the performances during the early stages and something Stephen Robinson has admitted he felt ‘had to change’. It’s a results driven game and when poor results are coupled with poor performances then something has to give.

On the latest MFC Podcast, I asked Keith Lasley if the pressures of that run of results and poor performances began to take their toll.

The Motherwell assistant manager explained that while the difficult times were a real challenge to overcome, he believes drastic change has led to much improved fortunes for the team.

“We knew something had to change andwe knew we might get the chance to bring in one or two during the January window,” Lasley explained. “While it may not be the ideal time to add new faces,the manager had decided we were going to make pretty drastic changes to how we played and what we did tactically.

“I think the key thing is to recognise when things aren’t going right and do something about it.

“Great credit has to go to the manager and the bravery to say this isn’t happening any more – it’s a big call to make, but one he and all the staff felt was necessary.

“Those changes made back in January gave us a big platform to build on and I think you’ve seen that in the early stages of this season.”

Those changes have undoubtedly paid off. Looking back at the Motherwell team in the first half of the 2018/19 season and the side that closed out the remainder of the campaign, the difference is night and day.

Robinson’s side won their first five Scottish Premiership encounters in 2019 and added a further four victories before the end of the season. Inspired by the performances of David Turnbull who deservedly swept the boards at the end of season awards evening and the likes of Jake Hastie, Liam Grimshaw and Gboly Ariyibi – the style of football changed and it was bringing positive results.

They’ve been able to build on their good form too and Motherwell’s record so far in 2019 has seen them earn 46 points from 25 games. In comparison from the same number of fixtures, Aberdeen have managed 40, Kilmarnock 37, Hibernian 31 and Hearts 21.

As the fans are enjoying the chance to dream and get carried away, those within the football club are stressing the importance of keeping their feet firmly on the ground.

“We didn’t go too down after losing games and the result dictates people’s emotions,” Stephen Robinson said after the victory over St Mirren. “It’s important that we continue to learn and to continue to get better.”

Much is often made of the recruitment process at the club and the fact that Motherwell operate with a transfer budget comparable to that of many English non-league sides.

It becomes the responsibility of the manager and chief scout Martin Foyle to sell the club to potential signings. Given the limitations of the budget available, new arrivals at Fir Park aren’t likely to be the finished article and some may have lost their way a little in the game.

What every new signing has in common is that they have potential, they have elements to their game that can be improved and in playing games in the top league of Scotland they will gain exposure through television coverage and the opportunity to play in front of much bigger crowds than they would have in the lower reaches of English football.

Not every addition to the squad will be a success and I’m sure that there will be a few examples that spring to the forefront of your mind as you read this, though again that comes with the territory of the market Motherwell are shopping in.

The same can be said for performance levels, with young and inexperienced players there almost inevitably will be highs and lows, days where it all clicks into place and days when you contemplate whether the team on the pitch have ever been formally introduced to each other.

The fans are have every right to be getting excited and as mentioned by the manager – results dictate emotions. Sowhile results are good let’s enjoy them,while keeping it in mind that there will be dips in form too.

When the tough times arrive, the acid testwill be the reaction of the management team and the players. What 2019 has shown us is that Stephen Robinson is more than capable of reacting to adversity and even if eight games into the season may be too early to reach for our passports, another positive display from this exciting young team today will allow us to enjoy another week of getting carried away.

The latest MFC Podcast with special guest Keith Lasley is available now on all major podcast apps, Spotify and via the podcast website MFCPodcast.co.uk.