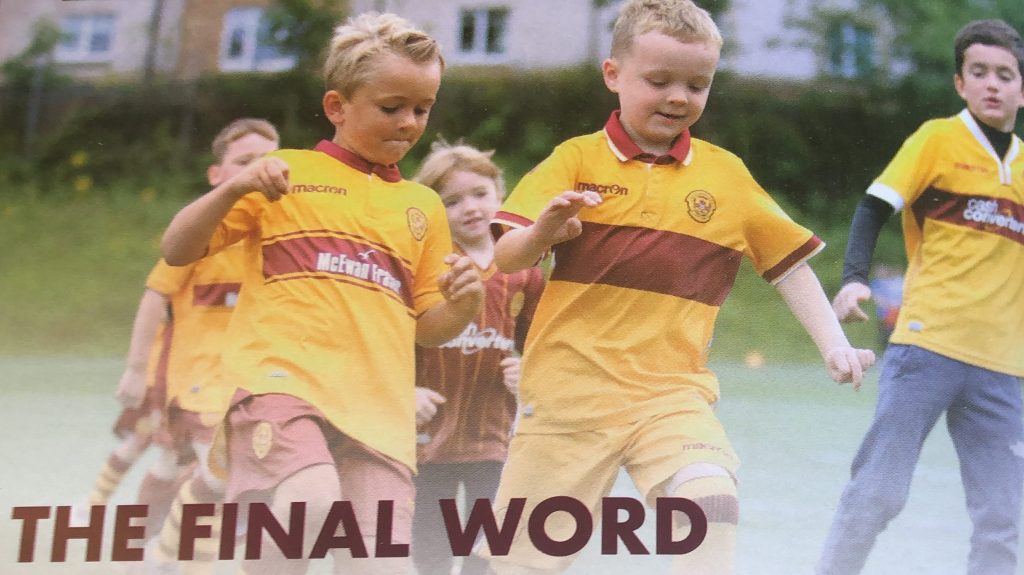 Amidst the furore that followed more suffering for the Scottish national team, I couldn’t help think back to my own childhood and my relationship with football.

Coming home from school, straight out with a ball, in for dinner and right back out until the last bit of light had faded – growing up in the 1990’s football was everything.

Those were simpler times, the internet was very much in its infancy, mobile phones were something owned by few and were the size of a large brick, four (and then five) channels on the television, football at 3pm on a Saturday, Sportscene later that night and any spare bit of land would host a game of football.

It’s easy to be over romantic about your childhood, but the mere mention of ‘cuppy doubles’, ‘combi’ and matches between ‘rival’ streets, bring the memories flooding back.

Playing for a team was a nice supplement to the endless hours playing football too. I played for Blackburn Rovers – we changed our name from Motherwell Miners after Kenny Dalglish’s side clinched the Premier League title in 1995. Our rivals were the likes of Motherwell Colts, Aston Villa and EK Swifts, with battles played out at Watling Street (the Motherwell Pavillion), Ballerup and the Hamilton Palace Grounds.

I think everyone who ever took to the pitch on a Saturday morning in those days believed it was their destiny to go on to be a professional footballer.

25 years on and as far as I’m aware, it was only Mark Reynolds who achieved his dream of going on to be a professional footballer from Blackburn’s ‘Class of 1995’, football is still a massive part of our DNA, though changes in society and perhaps more significantly technology mean the world is a drastically different place.

Following on from what was another disappointing week for the Scottish national side, the usual post mortem got underway. Kris Boyd was the most outspoken and offered his view that football was now a middle class sport and kids are being priced out of playing the game.

“All you see is no ball games signs everywhere. The football community of Scotland get the blame of it, but it’s everybody,” Boyd said. “Kids in South America play football on the streets; we’re encouraging people not to do it.

“And then we keep moaning all kids want to do is play computers – they’ve nothing else to do, because it costs an absolute fortune to go and play football because of what our country has created.

“We’re losing too many kids, it’s now a middle-class sport and to be honest, being a footballer now is not the be-all and end-all for kids coming through.”

There were accusations of hypocrisy levelled at Boyd given the prices for his ‘KB9’ soccer academy, though there’s certainly merit in some of his points too.

In my household, two of the boys play football. This can be a costly business, though as they head out to training or to a game on the weekend, I can’t help think back to doing the same as a boy and I see the same excitement.

Playing with their teams, the dedication and devotion of the coaches allows the kids to develop, learn and play regularly in a safe and supervised environment.

Unfortunately at home they don’t have the same luxury, we’ve had various neighbours at the door complaining about the noise coming from the bounce of the ball, worrying about potential damage to their car or that they are making noise as they enjoy playing football.

There are little alternatives either, most of the makeshift venues for my childhood games no longer exist, mainly being replaced by housing. Access to 3G pitches are restricted by padlocks, despite often sitting empty and Boyd is absolutely correct – the prices of hiring pitches is far too costly.

For me accusing kids of being lazy and more interested in alternatives is lazier than that accusation itself. While there are undoubtedly more options for children than ever before, there are also more restrictions.

Nowadays kids don’t have the same sort of freedom, though despite living in a world where more people have access to a mobile phone than they do a flushing toilet, Xbox’s and digital television – our kids still find time for football.

There will be many who have aspirations to pursue a career as something other than a footballer and that’s absolutely fine. Given the number of youngsters who will go on to make a living out of the game, it’s also very sensible.

We don’t need to make sweeping accusations about kids lacking commitment; instead we need to accommodate them. The days of playing football until the very last night may be gone, but the game still holds all of the same significance, if we can learn to stop hampering kids developing then we may just see Scottish football starting to move in the right direction.