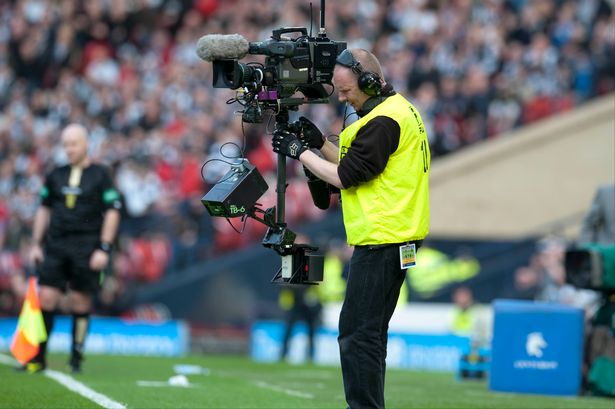 After Amazon broadcast a full round of English Premier League fixtures live on their online steaming service, could the way we watch football be set to change forever?

A Tuesday night fixture between Crystal Palaceand Bournemouth was perhaps a somewhat underwhelming way for Amazon to mark their first foray into broadcasting live football. But what would follow certainly offered plenty of food for thought.

All 10 midweek Premier League fixtures were shown on Amazon’s Prime streaming service, resulting in the two biggest sign-up days ever for the service in the UK.

In what is already a crowded market featuring both Sky Sports and BT Sport, fans of English football could be forgiven for letting out a sigh as they contemplate shelling out yet another subscription fee to follow their team.

Multiple subscription packages have become the norm for football fans in Scotland too. With BT Sport, Premier Sports and Sky Sports currently sharing the rights to show live matches, the life of an armchair fan is certainly an expensive one.

There was intrigue ahead of Amazon’s debut and the general consensus was it was an impressive first showing. The picture quality was excellent, many of the pundits insightful and the goals show was a continuation of BT Sport’s brilliant efforts on Champions League nights, allowing fans to watch the big moments straight after they happen.

That allows big moments to be seen by many and quickly. When there’s a big moment in a game, whether that is a brilliant goal, magnificent individual skill or a controversial refereeing decision, why not put it out there?

In Scotland we have broadcasting restrictionswhich quite often result in having to wait over 24 hours to see televised highlights of matches.

Are we missing out on a big opportunity to get people talking about Scottish football? A chance to show off what is going on and make inroads at removing misconceptions that many hold about our game by being on the front foot and getting it out there instantly?

Of course, the media team at Motherwell do great work to upload a highlights package online as soon as the restrictions are lifted at midnight on a Sunday morning, but the restrictions mean it is club-filmed footage, rather than the all singing, all dancing broadcast footage.

For supporters living abroad, the ability to stream live matches is a huge part of fuelling their passion and continuing to follow their team. The majority of sides in the top flight are now offering their own online broadcast services, allowing fans overseas to stream matches live.

It was brilliant to see the ‘Dubai Dossers’ converge on the Bidi Bondis Bar on Palm Jumeirah to see the Steelmen defeat Hearts last weekend. Those who previously would have had to miss out on watching their team in action no longer have that issue. As a fan-owned football club, having a highly engaged fanbase no matter where they happen to live is hugely significant.

Closer to home and just like with all broadcasting deals, there is an understandable fear that attendances will suffer as a result. There must be a real possibility that casual fans would opt for watching games on the cheaper streaming service rather than attending games.

There’s potential for this to have an influence on even the most dedicated of fans too. The option of watching from home or in the pub, especially when their team is playing away, could represent a real threat to attendances and that’s before considering the ever-increasing cost of attending matches.

Personally I don’t believe there is any substitute for watching a match from inside the confines of the stadium. Though at a time in which more and more of us have to pick and choose our games, then this would mean not being in the horrible position I’m sure many of you are familiar with.

Whether it be searching the internet for ‘a stream’, listening to radio updates, following the game on a live scores website or even worse a live betting page with the ‘safe, attack and dangerous attack’ updates that leave you imagining what is going on throughout every agonising second.

An interesting case study of a league that has embraced live streaming and reaped the reward is the German third tier 3.Liga.

Every single match in the league which features the likes of 1860 Munich and Kaiserslautern is shown live by Deutsche Telekom in high definition. It’s offered free to those with an internet and phone package with Deutsche Telekom or for €9.99 per month.

The deal is worth €18million to the clubs, with a further two million coming from a public station.

Previous motions for a subscription-based service in Scottish football fell by the wayside, though habits, trends and crucially technology haveadvanced greatly since Roger Mitchell’s proposals for SPL TV back in 2002.

The Scottish game has widespread appeal and football fans across the country are some of the most engaged in the world. So many of us live and breathe football, we have no problem criticising our own game. But if an ill-informed outsider dares try put down the Scottish game – they have in turn attempted to take us all on.

I believe the hunger and passion of Scottish football fans would make a dedicated streaming service a huge success. But what about the fans who attend matches?

Many of the complaints when it comes to the live broadcasting of football tend to revolve around moving kick-off times.

Amazon shifted start times for their Premier League debut and the Crystal Palace fans made their feelings known with a banner that read ‘Kick offs sold to the highest bidder, Amazon profits, fans suffer.’

Fans often feel like an afterthought when it comes to these scheduling changes. The best recent examples of this in Scotland have come in the Scottish Cup semi-finals, with Aberdeen and Inverness supporters travelling to Hampden for 12:30 kick-offs – presenting significant challenges for those travelling by public transport.

Sadly when considering the implementation of a broadcast deal, supporters who attend games seem to be very far down the list of priorities.

Should the time come where Scottish football opts to go down the route of offering a live subscription streaming service there would be numerous big issues to consider. But with advancing technology, changing habits and a desire to expand the appeal of the Scottish game – a step into new territory could represent a massive step forward.

Episode two of the new official Motherwell FC podcast ‘The Longer Listen’ is available on Apple Podcasts, Google Podcasts, Spotify and via most major podcast apps.