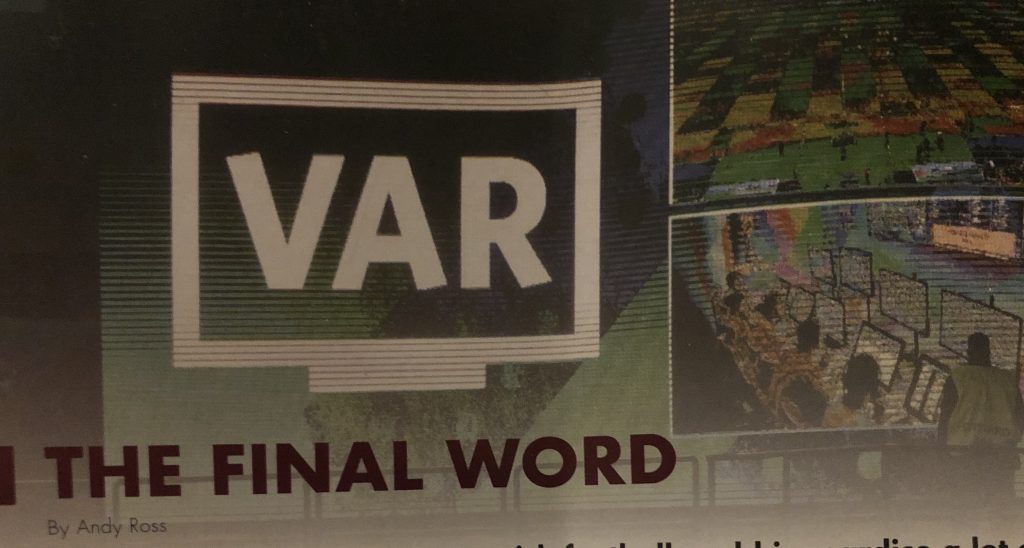 The introduction of VAR in Scottish football could jeopardise a lot of what we love about the game.

Picture the scene. Craig Reid has just forced the ball over the line and the away end erupts. Motherwell have secured second place with the final kick of the ball, but then referee Steven McLean signals he is going to consult with the video assistant referee (VAR).

The 1000 plus away supporters who until this point have been totally lost in scenes of unbridled joy stop dead, they now face an agonising wait to see if the goal will stand. When VAR finally returns its verdict, a foul on Jamie Langfield has been spotted in the build-up, the goal is ruled out, and it’s now the home fans that are delirious – Motherwell end the season in third place and it has been technology that has had the final say.

Here we have an illustration of a moment in football that could have been totally ruined by video technology.

Whether you are in the pub, in the stand, at work or pretty much anywhere else for that matter, we all love to have our say on controversial refereeing decisions. Some will decry the standard of officiating; some will allege bias against their team and almost every single time there will be disagreements. For me debating the referees performance is just as much of a tradition within the game as a pie at half time or losing our minds when an opposition player attempts to steal five yards when taking a throw in.

Controversy can quite often be what makes football brilliant and we can all point to examples of where our teams have benefited from a controversial decision and undoubtedly list 10 times more examples of occasions where we believe our team were given a raw deal.

Following on from the introduction of VAR in the English Premier League, a weekly debate has followed about the influence of video technology. It seems from crying out for what was previously heralded as a cure to poor decisions, has arguably thrown up just as many negatives as it has positives.

In the aftermath of the first week of EPL fixtures, English referees’ chief Mike Riley revealed that VAR had made four mistakes and as its use is limited to goals, penalties, straight red cards and cases of mistaken identity, there are key points in the game that will not be reviewed meaning the big decisions will remain the responsibility of the referee.

The intervention of VAR can also have a positive/negative impact on both the players and the crowd too. Take Tottenham’s recent fixture with Leicester City as a good example of this.

Son Heung-Min was found to be millimetres offside in the build to what looked to be the goal that put Spurs 2-0 ahead,  the decision to rule the goal out, which came after a lengthy two-minute review clearly had a major effect in what would happen in the remainder of the game.

The atmosphere inside the stadium lifted, the Leicester fans and players were buoyed while the high of thinking the game was almost put to bed followed by the subsequent disappointment, clearly had an opposite effect on the Spurs players – the Foxes would go on to win the game 2-1.

Gary Lineker agreed with Pochettino’s assessment adding that VAR “could and should benefit the game but at present it’s sucking the life out of it.”

When former referee Hugh Dallas leapt to the defence of officials in Scotland last week, fans reacted with a scathing assessment of their abilities. In truth there’s almost a bit of pantomime to it all, football fans throughout the ages have portrayed the referee as the villain.

Unfortunately there are times where the lines get blurred, such as the threats to John Beaton following the Rangers v Celtic fixture last December. Behaviour like that shouldn’t ever be excused and while officials have to be capable of facing criticism, times in which their private lives are dragged into matters are clearly unacceptable in the minds of any right minded individual.

In January, Scottish FA chief executive Ian Maxwell said there was now “a real appetite to investigate VAR” from clubs and officials and Motherwell chief executive Alan Burrows, who also sits on the SPFL board was quoted last year as urging the SPFL board to “get on the front foot with VAR and see if there is a way to do it”.

It appears there is an enthusiasm from those in the positions of power to push forward with the potential introduction of video technology and while they will argue that the pressures of the game dictate that ensuring every big decision in a game is correct, I can’t help but feel a lot of what we love about the game will also come under real threat should we implement these measures.

As the first few months of VAR in the EPL have shown, there will still be incorrect decisions only now there is someone else to blame.