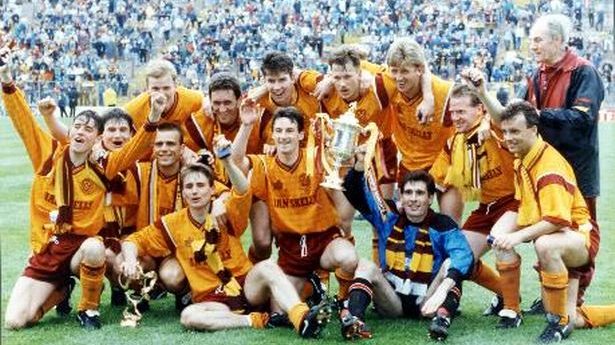 Ask any Motherwell fan to rhyme off the names of the players who clinched Scottish Cup glory on 18 May 1991 and they will do so with ease.

Tommy McLean and his side ensured legendary status at the football club on that day by winning a thrilling encounter after extra time and in the process ending the club’s 39 year wait for a major trophy – the last of which came with a 4-0 success over Dundee to earn the club their first ever Scottish Cup triumph.

Over 28 years on and it’s fair to say a lot has happened at the club during that time.

To compound that frustration for ‘Well fans during that period the likes of Raith Rovers, Inverness, St Mirren, Livingston and St Johnstone have all won either the League or Scottish Cup. Without attempting to engage in a debate on the size and stature of Motherwell in comparison to any of these sides, it certainly has been difficult to watch on as supporters of those teams have enjoyed their unlikely success.

Similar to being able to rhyme off the 1991 side, fans will also be able to do the same with cup disappointments. The indirect free kick in the 2006 League Cup semi-final, losing to 10-man Aberdeen in the last eight of the same competition in 2013 or what about THAT Albion Rovers defeat?

There has been plenty of times when a cup defeat has felt like it will take forever to get over, though it’s important to remember that throughout the 28 years that have passed since Tom Boyd held aloft the Scottish Cup draped in claret and amber ribbons, Motherwell have been a top flight club. Only Aberdeen and Celtic have enjoyed a more prolonged period at the top level of Scottish football.

Would we swap that for a cup win? Probably, but there’s reason to believe that we could end our long wait without having to endure relegation in exchange.

Following the last 16 draw that brought us tonight’s fixture at Fir Park against Hearts, there was a bit of despair from ‘Well fans after they saw their side paired with yet another Premiership side.

This year’s Scottish Cup fixture against Ross County was the first time that Stephen Robinson has come up against a team outside the top flight in the knockout stages of a cup competition since taking over as manager in 2017. Prior to the 2-1 defeat to the side that would go on to win the Scottish Championship, he had led ‘Well into 11 cup games, winning eight and losing just three – two of which were finals.

When you add into the mix Robinson’s haul of 11 wins and a draw from 12 Betfred Cup group stage fixtures, he boasts a win rate of 79.2% in cup competitions (66.7% excluding group fixtures).

It’s a hugely impressive record and offers some hope that the possibility of going all the way and lifting a trophy is possible under the guidance of the Northern Irishman.

Cup ties at Fir Park have always held a special significance. The crowd is usually boosted; the atmosphere is turned up an extra notch, while hope and expectation are both in a plentiful supply as supporters allow themselves to ponder what if?

We could have a new side to idolise, maybe our own unlikely hero, we could stop bringing out 1991 commemorative merchandise at every turn – I even think most of us would consider changing our bank pin numbers…

There’s a long way to go and if the previous 28 years have taught us anything then it’s that we may end up disappointed, though let’s soak up the big match atmosphere, get right behind the team and allow ourselves to believe that this could be our year.