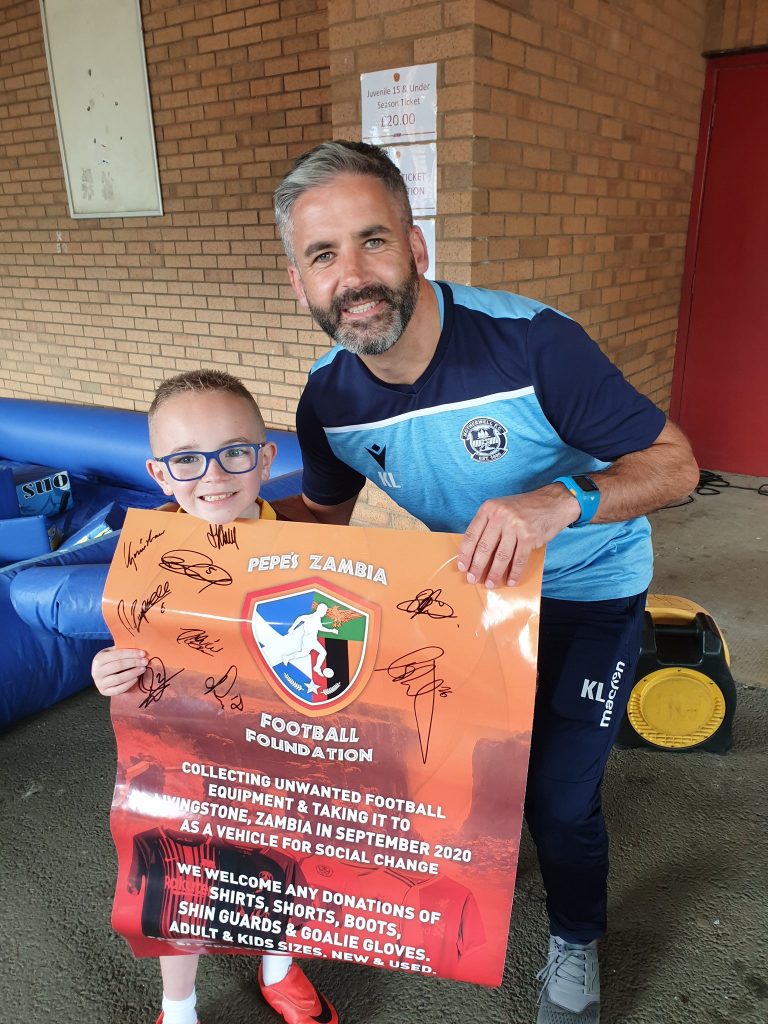 “I thought I’ll show you and ever since the idea has grown and grown.”

Next summer ‘Well fan Scott McClure will set off to Zambia on a fundraising trip that combines his love of football with his desire to make a difference.

‘Pepe’s Zambia Football Foundation’ is an idea that has stemmed from rather humble beginnings.

After spending the day spoiling his young daughter and her friends in celebration of her sixth birthday, he sat down in front of the television and turned on the BAFTA award winning film ‘The Last King of Scotland’ which follows Scottish doctor Nicholas Garrigan (James McAvoy) while in Uganda on a medical mission.

The thought provoking film and Scott’s words that followed would escalate rather quickly.

“I turned to my wife and said I really wanted to do something like that,” Scott recalled. “My wife didn’t really seem to take much notice and I thought ‘I’ll show you’.

In the weeks that followed, Scott laid the foundations of what would become ‘Pepe’s Zambia Football Foundation’. The project will see him collect unwanted football equipment and taking it to Livingstone, Zambia in 2020 as a vehicle for social change.

As well as his great desire to make a positive difference, he admits he has his own personal reasons in launching his football foundation.

“A few years ago I lost my dad and I have such fond memories of my time with him, especially going to the football together,” Scott explained. “After he passed I started to consider what I’ve achieved in my own life and how I’d like to be remembered.

“I’ve done well in my work and I’ve got a brilliant family, but I still wanted to do something to make the kids proud of their dad and I also hope my dad is looking down on me and my foundation is making him proud.”

It wasn’t long before donations of football equipment came flooding in from far and wide – something that has provided some storage challenges.

“The idea itself has just totally snowballed and the reaction has been totally overwhelming, he added. “I started off with a five foot storage unit and that has been upgraded to a 50 foot unit due to the amount of equipment donated already.

“I’m working in partnership with the Butterfly Tree Charity and they have already offered so much vital advice and support.

“There have been so many amazing donations; those who have followed my pages on social media will have seen I’ve been posting some pictures of some of the kit that has been donated.

“A stand out donation was a full set of Motherwell Hummel kits with the amber tractor print on them.

“Being a massive Motherwell fan, it would be so special to go over next year and have the opportunity to get a picture of a local school all kitted out in Motherwell shirts – maybe that’s me being a bit selfish, but that would be fantastic.”

With significant cost associated with shipping such large volumes of equipment, Scott has had to find ways to fundraise his trip. This evening will see the first of the foundation’s events as the Centenary Suite at Fir Park hosts a quiz and race night with all funds raised going towards the foundation.

During the event there will also be a host of incredibly rare football memorabilia and prizes up for grabs in the auction. As well as being a season ticket holder at Fir Park, Scott is also a member of the Glasgow Reds Liverpool Supporters Club and just days after a special evening for the Anfield side in the Champions League final, he would secure a special meeting with a Scot that played a big part in their success.

“One of the auction prizes is a framed and signed Andrew Robertson Liverpool shirt,” he smiled. “Inside the frame there is also a Champions League final programme and a match ticket from what was an amazing night.

“Getting to meet Andy was a real privilege and it was superb from my son to get to meet his hero.

“He seemed genuinely interested in the foundation and wished me all the best with it all.

“I’m really looking forward to the first event at Fir Park; the cost of undertaking the project is one of the reasons why I won’t be travelling out until September 2020.

“I hope everyone has a brilliant night and we can raise lots of money for the foundation at the same time.”

As Scott continues to promote his foundation, he is hoping to host an equipment drive at Fir Park in the near future and is hoping Motherwell supporters will get right behind the cause.

“My Facebook and Twitter pages will be kept updated with all the latest on the foundation,” Scott added. “If there’s anyone looking to donate unwanted football equipment I’d love to hear from them.

“I’ve already had a good meeting with Alan Burrows about how Motherwell can support the foundation and the MFC Podcast has also got on board.

“Thanks to the podcast we will be sponsoring Jermaine Hylton’s away shirt with a prize draw where fans can win a place at the player of the year event and Jermaine’s shirt.”