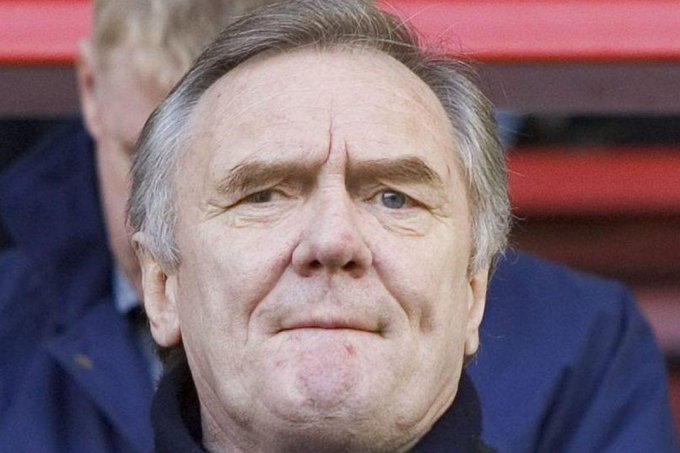 With a win percentage of 66.6%, Davie Hay is statistically the most successful Motherwell manager of all time.

Stepping up from assistant boss to the role of manager after the resignation of Ally MacLeod in the summer of 1981, Hay took on the managerial reins and was tasked with taking the Steelmen back into the top-flight.

A memorable season followed in which Motherwell would romp away with the title, scoring 92 goals to create a First Division record for the number of goals scored.

Although the season ended in triumph for the ‘Well boss, Hay endured a difficult start to his managerial career as Motherwell dropped out of the League Cup at the group stages and in his first league match he saw his side defeated 1-0 at Kilmarnock.

The Motherwell board took eight weeks to give Hay the job, though their new gaffer didn’t have to wait as long before the supporters voiced their opinions.

“It took a while before I was appointed and think the club were just waiting to see how it would pan out,” Hay recalled.

“I never thought anything of it at the time and never really doubted I would get the job.

“We didn’t get off to the best of starts in the league and we lost on the opening day at Kilmarnock.

“It was a really poor game, both teams were trying to play the offside trap and there was a lot of congestion in the middle of the park.

“I remember I was sitting in the old enclosure at Rugby Park and a punter turned round to shout at me that the style of football would get the game stopped.

“He added that I might have been alright as a player, but if this is what I’d be like as a manager then I should chuck it right away – I went down to the dugout in the second half after that.

“As a manager I watched a lot of games from the stand, I always felt that you got a better view from there.”

While life as a manager didn’t get off to the best of starts, it wasn’t long before Hay’s ‘Well team were blowing opposition away with their attractive brand of attacking play.

Dumbarton were dispatched 6-0 at Boghead, Clydebank suffered a 7-1 hammering at Kilbowie before a memorable week where a 6-1 victory over Dunfermline was followed by a 6-0 success over East Stirling.

Motherwell were in imperious form and enjoyed a 23 match unbeaten run between September 1981 and February 1982.

“We had a very good team,” Hay added.

“The midfield was talented, skilful and well balanced with Brian McLaughlin, Alfie Conn and Graeme Forbes in the middle of the park.

“In Willie Irvine and Bruce Cleland we had two very good strikers and then you had the likes of Joe Wark who was the captain and Hughie Scott in goal.

“It was installed in my thinking process from my time with Celtic that we played attacking and exciting football – that’s exactly what we set out to do.”

In a season in which Motherwell were turning on the style, one of the game’s biggest icons visited Fir Park.

George Best was nearing the end of his career and after a spell with Hibernian had returned to America to play for San Jose Earthquakes.

Despite the presence of the former Manchester United star, San Jose were unable to stop the free scoring Steelmen from racking up another big victory however, and a bumper crowd witnessed a 5-2 victory for the home side.

“I can’t remember too much about it other than it being because George Best was playing for them and there weren’t many more glamorous players than he was,” the former Celtic and Livingston boss recalled.

“Although he wasn’t at the height of his career, it certainly added an extra attraction to that particular game.”

Another match of note was the 1-0 Scottish Cup third round defeat to Alex Ferguson’s Aberdeen at Fir Park.

John Hewitt broke the deadlock after just 9.6 seconds and his goal remains the fastest in the history of the Scottish Cup.

“We actually played very well that day and probably gave Aberdeen their toughest challenge on their way to winning the Scottish Cup that year,” remembered Hay.

“The goal came from a mistake at the back, I remember who it was and I won’t name any names – it was John Hewitt who got the goal for Aberdeen.”

It would be a 3-1 victory over Falkirk at Brockville that would secure the league title for Motherwell and they would end the season 10 points ahead of Killie who finished in second spot.

Three players had scored 56 goals between them over the course of the season, with McLaughlin and Irvine scoring 20 each and Clelland chipping in with 16.

Despite enjoying a highly successful first season in charge at Fir Park, Hay would depart the club to take a job in America.

He would go on to manage Celtic where he won the Premier League title and the Scottish Cup. Spells at Lillestrøm, St Mirren, Dunfermline and Livingston followed for the 71-year-old, who currently works with New College Lanarkshire.

“I thoroughly enjoyed my time at Motherwell,” the former Scotland international said.

“I left to take up a job in America which didn’t materialise, it was my own doing and I can’t blame anyone for it.

“I’d always fancied living there and I tried again later in my career, unfortunately with the same outcome.

“I left Motherwell winning but I’d have liked to take the team into the top flight.

“I’m eternally grateful for Ally MacLeod for giving me the opportunity at the club; it was a good place to start my coaching career.

“The chairman at the time was Bill Samuel and he was the best chairman I ever worked with – I sometimes joke that maybe it’s because I only worked with him for a short period of time, so we never had room to fall out.

“I enjoyed the football side and the social side with him; he was a really good person to know.

“He took the directors and coaching staff to Madrid for the European Cup final between Nottingham Forest and Hamburg, then Liverpool v Real Madrid in Paris – it was a good bonding trip and very enjoyable I’ve got to say.

“I’m pleased to see how Motherwell are doing, they always tend to fight above their weight by bringing in young players.

“It looks like they’ll make the top-six this season and the structure is very good at Fir Park.”