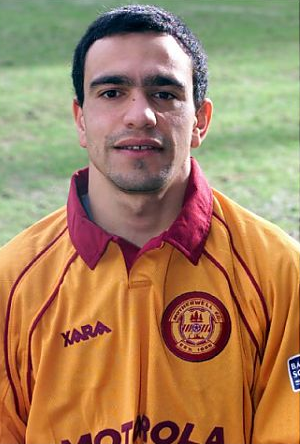 Yesterday marked the 19th anniversary of a game that will be forever remembered for the incredible impact of a pint-sized Frenchman, who would go on to make arguably the greatest debut in the club’s history.

Motherwell under the guidance of Eric Black were fighting a battle at the bottom of the SPL table, though a run of three wins in their previous five league fixtures prior to the visit of Hibernian to Fir Park looked to have stopped the rot and moved the team into ninth spot – well clear of St Johnstone who looked certainties for the drop.

Hibs made the journey from the capital in wretched form, having failed to win in their last 16 SPL matches as well as suffering a hugely disappointing defeat to Ayr United in the League Cup semi-final in their last outing.

The first half was an instantly forgettable one and certainly not one that gave any indication of what was to follow.

Neither side looking offered much an attacking threat and it was clear Motherwell were missing the influence of James McFadden who was ruled out through suspension while Stephen Pearson had failed to recovery from injury.

At the interval, Black opted to introduce his latest signing, David Ferrère into the action – with the 5′ 5” striker replacing Scott Leitch.

The 25-year-old had scored one of the goals in an under-21 match against Kilmarnock at Fir Park in midweek and he arrived in Scotland highly recommended by Black’s former club, Metz.

Despite that, his inclusion, even on the substitutes bench surprised some. In their review of 2002, Fir Park Corner described Ferrère’s display for the second string as ‘one of the worst performances ever witnessed for the U21s’- it is fair to suggest that expectation levels were not too high.

Ferrère’s debut was only four minutes old when he first gave the Fir Park crowd a demonstration of his ability to strike a ball. Stepping up to take a free-kick 40-yards from goal, he had Nick Colgan in the visitors’ goal scrambling with a thunderous effort that drifted inches wide of the post.

The ‘Well fans reacted with a mixture of amazement and almost an element of hilarity. Here was an unknown debutant coming into the action, attempting an outrageous effort from distance, and almost succeeding in doing so.

There was certainly a buzz around the place, the crowd were lifted, there were cries of ‘shoot’ every time Ferrère’ got on the ball and it would not be long until the Frenchman had the fans on their feet again.

A long clearance by Karl Ready found Stuart Elliott who drove forward before releasing Ferrère to drill the ball low beyond the keeper.

Every outfield player in claret and amber joined in the celebrations – clearly loving the impact that their new teammate had made in his seven minutes on the park.

David clearly shared their delight too, wearing a shirt that looked at least three sizes too big for him, he lapped up the adulation – he was off the mark for the Steelmen and looking in the mood for more goals.

Hibs had opportunities through Derek Riordan and John O’Neil, however just as it looked like they may force their way back into the match, Ferrère struck again.

Stevie Woods launched a goal-kick that travelled deep into the Hibs half and Dirk Lehmann knocked the ball on to Elliott who again picked out Ferrère to slam home an almost identical shot into the bottom corner past the helpless Colgan.

‘Well were flying and it wouldn’t be long until they extended their lead even further as Lehmann got in on the act – heading home Steven Hammell’s free-kick.

The final act of an incredible second half came when Ferrère completed a quite magnificent debut.

O’Neil dwelled on the ball before being robbed by Lehmann and the German striker released the onrushing Ferrère who dispatched the ball into the bottom left corner of the goal – completing his hat-trick by hammering the ball into almost exactly the same section of the net.

He had been on the pitch 36 minutes and by this point was averaging a goal every 12 minutes – if the ‘Well fans were excited after his first two goals, they were now electrified – they had a new hero among their ranks and certainly not one they had in any way anticipated.

Inspired by the introduction of their latest signing, ‘Well emerged 4-0 victors from an encounter that look destined to be settled by the smallest of margins after an uneventful opening 45 minutes.

It had only taken a short period of time for Ferrère to receive the adulation of the Motherwell supporters, though unfortunately after his spectacular introduction, he would never come close to repeating his debut heroics.

He played a further nine times for the club but would fail to score another goal and he would make his last appearance for ‘Well in the 4-1 victory at Rugby Park, just days after the club entered administration.

The Frenchman’s time in North Lanarkshire came to a sudden end when he was released because of the cuts that followed administration and following his Fir Park departure he headed back to his homeland to join L’Entente SSG.

After a blistering start to life at the club, it was a low-key exit for a player who perhaps was always unlikely to be able to live up to his extraordinary debut.

The remainder of his career was spent in France with spells at FC Dieppe and AS Excelsior, before hanging up his boots after his time with FC Avirons.

Although it would be fair to say that his career never reached the heights of his extraordinary first showing at Fir Park, the name David Ferrère will always remain synonymous with the greatest Motherwell debut of all time.