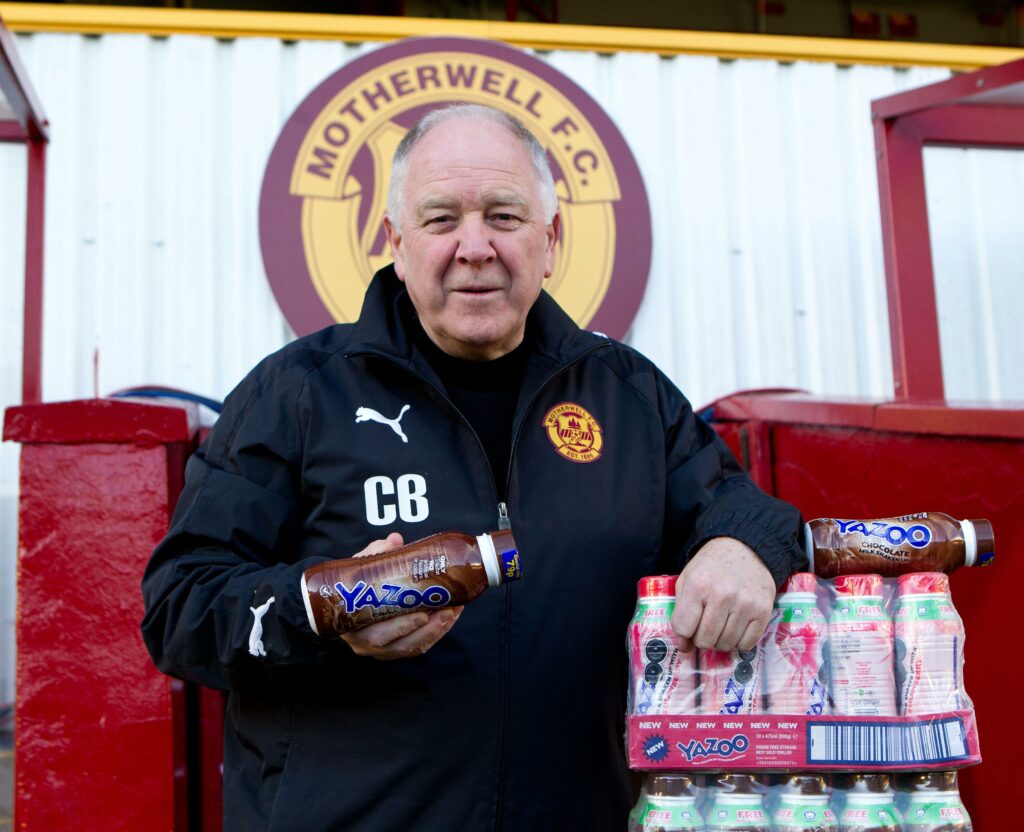 Former Motherwell and Scotland manager Craig Brown is expecting an exciting season in the Scottish Premiership after a summer to remember for fans across the country.

There were plenty of opportunities for Brown to take a trip down memory lane in recent months, as Scotland finally ended their 21-year absence from a major tournament – with much of the build-up based around a nostalgic look back on times where qualification was almost taken for granted.

The 81-year-old, who led the Scots to the 1998 World Cup and the European Championship in 1996, was thrilled to see the national side grace the big stage again and feels the foundations have been laid for more of the same when it comes to qualification.

“I’m just trying to imagine if we weren’t in that tournament what a summer would have been like, it would have been quite a disaster in my view,” Brown said. “It was great for us to be back, there’s no doubt about it.

“I have travelled across the world and I’m still a part of the European Coaches Association and when we meet, they all admit a tournament without Scotland is just not the same – the fans bring a colour and noise to the occasion.

“It was a delight to see the team back, though I was a wee bit disappointed we were a bit meek against Croatia in the crucial game especially. We played brilliantly against England and if we had maintained that against Croatia then we maybe would be talking about having progressed out of the group.”

Despite Steve Clark’s men falling short in their quest to progress through to the knockout stages of a major tournament for the first time, Brown is confident the future is looking bright for the national side.

He pinpoints the likes of Andy Robertston, John McGinn, Kieran Tierney and Scott McTominay as the players who will drive the team on to future success, though believes it is too early to hail Chelsea youngster Billy Gilmour as a future star in the dark blue.

“I think everything is in place absolutely, the fans are behind the team and the manager,” he added. Hopefully we can take advantage of the groundwork that has been done so far.

“We have some smashing young players and that’s even without Billy Gilmour who really has only had one outstanding game.

“I think back to Barry Ferguson who at the same age commanded the game against England in the play-off at Wembley, they had a very powerful midfield that had the likes of Paul Ince, Paul Scholes, Jamie Redknapp and David Beckham, but the best player on the park was Ferguson.

“At that time, he was just a year older than Gilmour is just now. I think he has a bit to do yet to get to that standard, though having won the Champions League at Chelsea and earning Man of the Match against England at Wembley he has already achieved a lot in the game.”

Brown oversaw the national team for 70 international fixtures, more than any other Scotland manager. After stepping down after the Scots failed to reach the 2002 World Cup, he took up the hotseat at Preston North End six months later.

It was at Deepdale where he would work with ‘Well boss Graham Alexander and his assistant Chris Lucketti – two individuals he has retained a great level of respect for.

“Along with Keith Lasley, Motherwell have three great guys in charge of the team – I really hope they do well,” he said. “Lucketti was the most expensive signing that Moyesie (David Moyes) made for Preston, he signed him from Bury and he was the captain of the club –Chris is a brilliant guy and a very good player.

“Graham Alexander was a massive player for Preston, he’s a club legend there and went on to captain the side. As for ‘Las, he is outstanding as a guy, and he was an outstanding player.”

Brown’s time at Preston would come to end in August 2004 and he would be replaced by former Motherwell gaffer Billy Davies. He reflects on his time with the Lilywhites as one where financial constraints played a big factor, something that denied him the chance to secure the services of two future Scotland stars.

“We had an offer for James McFadden rejected when he was at Motherwell and I actually also tried to sign McFadden for Aberdeen when he was at Birmingham. The selling point was that he has family in Stonehaven and we’d get him a house there, though it didn’t come to pass.

“Ricardo Fuller who we had signed for Preston from Hearts, was sold to Portsmouth who were in the Premier League at the time, and I was given £400,000 to spend.

“I didn’t spend it as the guy I wanted was a lot more expensive – that player was Scott Brown from Hibs. I had £400,000 to spend and he went to Celtic for over four million, I only was able to offer 10% of that – we were nowhere near in the offer we made.”

Over five years would pass before Craig returned to management, stepping in on what initially appeared to be a temporary basis when Jim Gannon was sacked by Motherwell. It would be his first in Scottish club management since he left Clyde in 1986.

His predecessor Gannon was a controversial character, who despite success in the transfer market, found himself clashing with the more experienced players at the club as well as the footballing authorities.

Brown’s close friend and vastly experienced assistant manager, Archie Knox accompanied him to ‘Well and the pair were hailed the ‘Jack and Victor’ of Scottish football.

Their impact was almost instant and from struggling at the foot of the table, the Steelmen would finish in fifth spot and as a result secured a place in the qualifying stages for the Europa League.

“Jim Gannon signed a few good players, but the team weren’t playing well, myself and Archie came in temporarily to help out, but it went well and the club were happy to keep us,” he recounted. “Jim wanted a young team, but it was quite easy to change the fortunes at Motherwell, when you looked at the quality of the guys who weren’t playing, the likes of Stephen Craigan, Stevie Hammell and Keith Lasley had been frozen out.

“Bringing in these experienced players improved the team immediately and we had a very good record with them. We didn’t have money to go out and buy players, we had to look for transfers that wouldn’t involve a fee or look at loan signings.

“We had a very good goalkeeper in John Ruddy during the first season and managed to get one every bit as good in Darren Randolph for the following campaign, a good goalkeeper helps you a lot – getting him on a free was a huge boost for the team.”

In the qualifying stages for the Europa League, Motherwell would impress. Icelandic side Breidablik were dispatched before a superb showing in the 4-1 aggregate triumph against Aalesunds FK set up a play-off encounter with Danish outfit Odense.

It would end in disappointment for the Steelmen, who lost the tie 3-1 on aggregate and even 11 years on, the former ‘Well boss has some regrets of how the tie unfolded – including the actions of the Odense Sporting Director who learned the hard way not to upset Craig Brown.

“I think it has to be said that it was a massive achievement to reach the play-off stage,” he said. “Aberdeen have been in Europe the past five seasons and haven’t reached the play-off yet, we had one year at Motherwell and reached that stage.

“There was an incident with their Sporting Director at the end of the second match, he barged into me – rather than go round me, he tried to go through me – so I had a wee punch at him. It was just an impulsive reaction, there was a wee bit of bitterness about it, it is not usually associated with Danish football, and I was astonished by the way he acted.”

Motherwell and Hibernian both open their respective Scottish Premiership campaigns here at Fir Park this afternoon in a fixture that has served up more than its fair share of drama over the years – though there undoubtedly is one encounter that stands out from the rest.

In May 2010, the two sides played out an incredible 12 goal thriller, with Lukas Jutkiewicz’s sublime volley in injury time completing a remarkable Motherwell comeback from 6-2 behind to level the match at 6-6 in the most dramatic of circumstances.

It was a night that nobody involved or in attendance will ever forget, though the memories of watching his side concede six goals on home soil still frustrates Brown.

“I joke about the game, when people ask, I tell them that Archie was coaching the defence and I was coaching the attack – you can imagine Archie’s response to that,” he laughed. “It was embarrassing to be behind in the game as we were, Colin Nish scored every time he shot – it was quite unheralded for him to play as well as he did that night.

“It was a very exciting game for the fans, but as a manager it isn’t one you are proud of, to lose six goals at home is quite frankly a disgrace. If you remember the next game, we went to Ibrox and came back from 3-1 down to draw 3-3 against Rangers, so we made a habit of big comebacks.

“Although it was an exciting one, I look back on that night with a bit of embarrassment – our defence just fell apart.”

Although Brown and Knox were only at the club just short of a year before moving on to Aberdeen, the veteran manager still holds a strong affinity for the Steelmen.

He admits the controversial circumstances of his departure perhaps ‘blotted his copybook’ with some supporters, though is keen to stress that had certain circumstances been met, history would have taken a different course.

“We were working without a contract – if we had signed a contract there is no way we would have left,” said Brown. “I loved Motherwell and still do.

“Even when I left, initially I had said no, as we had a far better team than Aberdeen – we had been up to Pittodrie and beat them 3-0. Leeann Dempster talked about a contact and presented one to us, we said we would sign it providing the bit was removed that said we would not oversee the full football operation.

“I oversaw the first team only and Gordon Young, who was excellent incidentally, oversaw the youths. He had a watertight contract that stated he was in full charge of the teams from under 20’s down.

“All Motherwell had to do was alter that and give me full control over the whole football operation and if they had done so I would never have broken the contract.

“What could have come up from that was that if Gordon Young wanted to play Steven Saunders who was coming through at that stage for a Youth Cup tie and I wanted him for the first team, he could overrule me because he had sole charge of every player under the age of 20.

“I would have been happy to delegate and give control to Gordon as he’s an outstanding coach – it is a shame we weren’t able to resolve the issue as if we could have sorted that we would have remained here and have been very happy.”