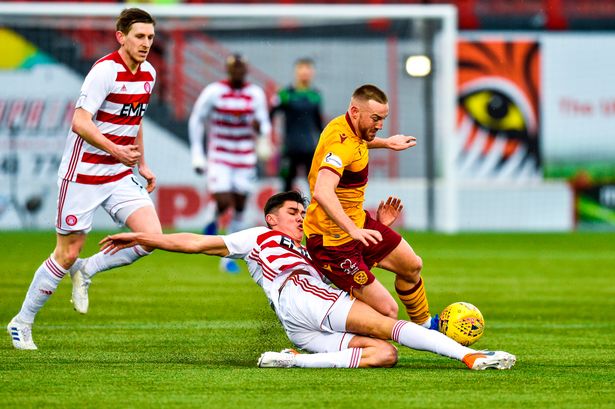 The Lanarkshire derby is normally a well-contested and passionate affair, prompted further by the supporters. Now, the verve must come solely from the 22 on the pitch.

For Motherwell a Lanarkshire Derby hasn’t always meant a meeting with Hamilton, though in recent times this fixture has taken on an increasing level of importance.

It has been over 27-years since Motherwell last took on Airdrie in league action and it would take until 2008 for their next Lanarkshire Derby in the league.

Following on from Hamilton earning promotion to the top-flight for the first time in 20-years by clinching the Division One title in 2008, the teams would face off five times during the 2008-09 campaign.

Since Chris Porter’s brace earned ‘Well a 2-0 victory over Accies in November 2008, the teams have met a further 31 times in the league.

The Steelmen have come out on top 13 times, Hamilton have won 10 and eight fixtures have ended in stalemate.

“Even though it’s maybe not traditionally as big a derby as some of the others in Scotland, it was certainly a big occasion to be involved in both as a player and now as a coach,” said Motherwell assistant boss Keith Lasley.

“I think maybe it’s what generation you come from that dictates which one holds more significance in terms of the Lanarkshire Derby, though with Motherwell and Accies having been in the same league for quite some time now, it has built up a lot.”

Keith’s view is one that’s shared by Dougie Imrie, who over the years played a key-role for Accies in their meetings with Motherwell.

While there was never any love lost between the midfielder and the ‘Well support, Imrie thrived on playing in these fixtures and was rarely far away from the spotlight.

Now working for Accies as a youth coach, he holds both positive and negative memories of coming up against the Steelmen.

“For both teams, the bragging rights are massive,” Imrie explained.

“Anywhere I went to and got a bit of abuse, I rose my game a little bit and I think I always did that against Motherwell whether that be popping up with a goal or an assist – I enjoyed the games and the atmosphere was always fantastic too.

“Everyone was bang at their game and both of those games are very memorable.

“I’ve also been on the end of a few heavy defeats against Motherwell as well, so I know how it feels to be on both sides and I’m well aware of how much it means to the supporters– the result will have a massive impact on people’s weekends.

“For today’s game I think the players will have to get themselves going and with it being a derby and crucial points at stake, that shouldn’t be too difficult.”

Unfortunately, fans will be unable to be inside Fir Park for this afternoon’s Scottish Premiership fixture, meaning both sets of supporters will have to watch on nervously from home as the teams do battle amidst a surreal atmosphere.

Motherwell season ticket holder Scott McClure, regards a game with Hamilton as a must win for his side, though is well aware of the ability of Accies to spring a surprise.

“When the fixtures are released you certainly look out for your games against Hamilton,” Scott said.

“It’s always crucial to get a result against Accies, every season they are tipped for relegation.

“I feel we are a far bigger team, but that makes it even harder when we don’t win.

“There’s certainly plenty of passion on show, I think of the games we didn’t win for example Peter Hartley pushing Dougie Imrie at full-time a few years ago.

“I don’t think the lack of fans will make too much of a difference today, we seem to be getting closer to form now and I’m sure after four games the players will be growing more used to the circumstances.”

Accies’ Supporter Liaison Officer, Sean McHugh admits it comes as a source of frustration that some ‘Well fans see a fixture with Accies as a lesser derby and believes that their small but loyal fanbase have big expectations when it comes to facing Motherwell.

“The significance to Hamilton fans I think is huge, we are always looking to better ourselves against Motherwell and get a result – at the start of the season we always aim to win two or three of the derby matches,” he said.

“I think it probably is a bit of an annoyance to Hamilton fans, that some ‘Well fans classify us as the smaller neighbours and that Airdrie is the bigger game for them.

“In recent years Airdrie have been down the leagues and we’ve been in the Premiership, during that time there has been some tightly contested games when we’ve given Motherwell a bit of a doing and then there’s been extended runs where we’ve struggled to get a result against you.”

When pressed for their Lanarkshire Derby highlights, both Imrie and Lasley have matches that instantly spring to mind.

Lasley admits most of his memories come from victories at Hamilton, where the ‘Well are roared on by their supporters who pack out the away stand behind the goal.

“The memories I tend to hold tend to be the away games rather than the home games,” he explained.

“To walk out and see the Motherwell fans pack out the stand behind the goal was always great and some of my fondest memories came from getting a result there and seeing the supporters erupt – it was always a nice sight.

“The game where Louis Moult scored the winner in 2016 is one that springs to mind, from memory it wasn’t a great game of football, which can often be the case with derbies, though particularly at that venue where a game of football can sometimes struggle to break out.

“It was a moment where my first reaction was to look up and see the fans going crazy.

“Tom Aldred getting a double a couple of years back was another big moment at that end too.

“There have been some disappointments as well, though the good moments are the ones that stand-out.”

With Accies often finding them outnumbered in terms of supporters inside the stadium, some have suggested that they may find the adjustment to playing behind closed doors easier.

McHugh disagrees with this assessment however, insisting the crowd are a hugely significant factor in driving the players on.

“I think the lack of a crowd will make a real difference,” he added.

“I spoke to one of our players recently about the suggestion that no crowds would suit Hamilton players as they don’t particularly play in front of a bigger crowd and he argued that in fact it was the opposite – you take that extra adrenaline from playing in front of a crowd.

“It’s not just from your own fans, but also the opposition fans too – today’s game will be a totally different atmosphere from usual and who deals with it best will be a big factor in the outcome of the match.”

Many of Lasley’s derby highlights revolve round the scenes of celebrations with the ‘Well fans and despite their absence inside the ground this afternoon, he and Stephen Robinson have been reminding their players how much this game means to the fans.

“Playing in an empty stadium is different, the feeling of the game, the ebb and flow, as well as the momentum of the game doesn’t seem to be as clear when they fans aren’t there,” the ‘Well assistant continued.

“Fans can drive a game of football at times with the feeling and emotion coming from the stands, that’s always even more charged in a derby match.

“It will be different, but that’s the same for both teams and the players will be made well aware that even though our fans won’t be with us in the stadium, but they’ll still be right behind whether be watching on a TV screen or listening in on the radio – this is a derby match and one that we are determined to come out on top.”