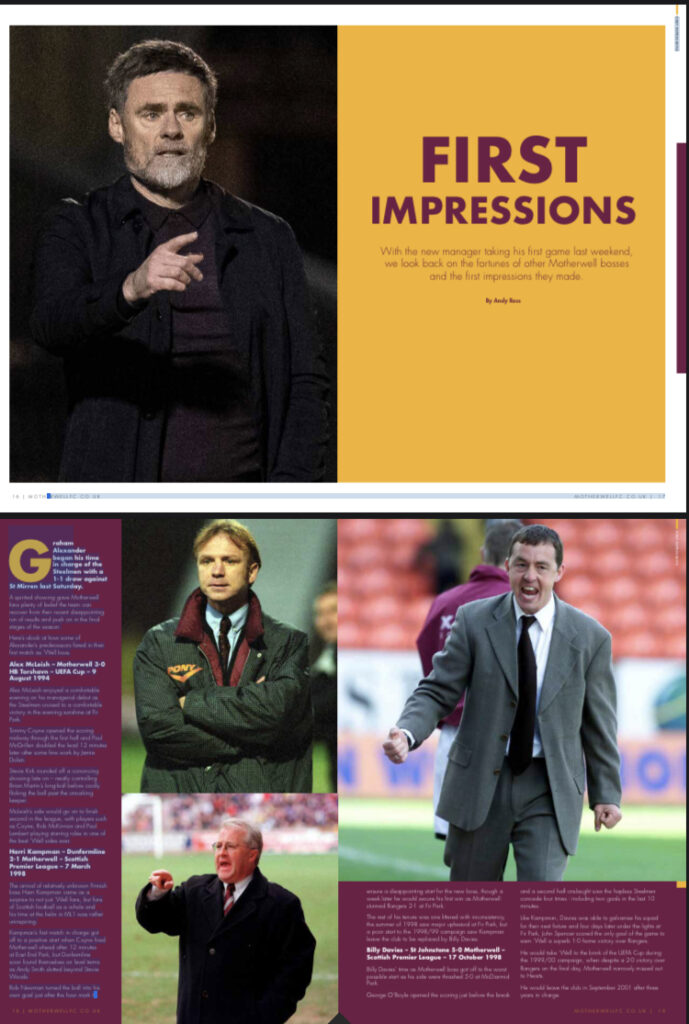 Graham Alexander began his time in charge of the Steelmen with a 1-1 draw against St Mirren last Saturday.

A spirited showing gave Motherwell fans plenty of belief the team can recover from their recent disappointing run of results and push on in the final stages of the season.

We take look at how some of Alexander’s predecessors fared in their first match as ‘Well boss.

Alex McLeish enjoyed a comfortable evening on his managerial debut as the Steelmen cruised to a comfortable victory in the evening sunshine at Fir Park.

Tommy Coyne opened the scoring midway through the first half and Paul McGrillen doubled the lead 12 minutes later after some fine work by Jamie Dolan.

Stevie Kirk rounded off a convincing showing late on – neatly controlling Brian Martin’s long-ball before coolly flicking the ball past the onrushing keeper.

McLiesh’s side would go on to finish second in the league, with players such as Coyne, Rob McKinnon and Paul Lambert playing starring roles in one of the best ‘Well sides ever.

The arrival of relatively unknown Finnish boss HarriKampman came as a surprise to not just ‘Well fans, but fans of Scottish football as a whole and his time at the helm in ML1 was rather uninspiring.

Kampman’s first match in charge got off to a positive start when Coyne fired Motherwell ahead after 12 minutes at East End Park, but Dunfermline soon found themselves on level terms as Andy Smith slotted beyond Stevie Woods.

Rob Newman turned the ball into his own goal just after the hour mark to ensure a disappointing start for the new boss, though a week later he would secure his first win as Motherwell stunned Rangers 2-1 at Fir Park.

The rest of his tenure was one littered with inconsistency, the summer of 1998 saw major upheaval at Fir Park, but a poor start to the 1998/99 campaign saw Kampman leave the club to be replaced by Billy Davies.

Billy Davies’ time as Motherwell boss got off to the worst possible start as his side were thrashed 5-0 at McDiarmid Park.

George O’Boyle opened the scoring just before the break and a second half onslaught saw the hapless Steelmen concede four times – including two goals in the last 10 minutes.

Like Kampman, Davies was able to galvanise his squad for their next fixture and four days later under the lights at Fir Park, John Spencer scored the only goal of the game to earn ‘Well a superb 1-0 home victory over Rangers.

He would take ‘Well to the brink of the UEFA Cup during the 1999/00 campaign, when despite a 2-0 victory over Rangers on the final day, Motherwell narrowly missed out to Hearts.

He would leave the club in September 2001 after three years in charge.

A poor start to the 2001/02 season led to Davies’ resignation and again those in charge at Fir Park opted for an untested boss for the role of manager at the club.

Eric Black took over with the side having won just two of their opening 10 league encounters and they were knocked out of the League Cup by local rivals Airdrie.

Craig Easton had the hosts ahead on 23 minutes, but Motherwell would find a reply through David Kelly early in the second half to secure a share of the spoils.

When Motherwell were placed into administration in April 2002, Black resigned as manager and was replaced by his assistant Terry Butcher shortly afterwards.

On a day where football felt like an afterthought, Terry Butcher’s young Steelmen produced a sublime display to offer the large travelling support a bit of hope.

Motherwell had been plunged into administration days prior to the game, with several players and staff losing their jobs.

The future was looking uncertain at best, but on the field the team were magnificent. Derek Adams had his opening goal cancelled out by Tommy Johnson on 68 minutes before the ‘Well came roaring back – scoring three times in four minutes.

In his four years in charge at Motherwell, Terry Butcher restored some much-needed stability to the managers post at Fir Park and after he departed for Sydney FC it was hoped the appointment of his assistant Maurice Malpas would keep things moving in the right direction.

Malpas’ first game in charge saw a visit from Rangers to Fir Park, with the Ibrox side themselves under the guidance of a new boss after Paul Le Guen took over from Alex McLeish that summer.

Things got off to a bad start when Libor Sionko drilled home a rebound to give Rangers the lead after eight minutes, but Phil O’Donnell levelled shortly after half time.

The match was decided when Dado Prso headed home from Charlie Adam’s corner to ensure it would be a losing start for the new Steelmen gaffer who would have to wait until his fifth league game in charge before sampling victory for the first time.

After a season in which Motherwell narrowly escaped relegation, another managerial change took place and on this occasion, John Boyle opted for experience when he appointed former Wolves and Leicester boss Mark McGhee as the new boss.

McGhee’s tenure got off to a dream start when Steven McGarry slid home three minutes into his first match in charge at St Mirren.

It was a wonderful attacking move involving most of the team and was a great indicator of the fantastic football that would be on display as the Steelmen clinched third place and European qualification for the first time in 12 years.

Motherwell boss Jim Gannon suffered an embarrassing defeat by Llanelli in Europa League qualifying in his first match in charge of the Steelmen.

Due to remedial work to the Fir Park surface, ‘Well played all of their Europa League ties at Airdrie and despite a bright start to the match they found themselves behind after Stuart Jones steered a header beyond Michael Fraser.

It was a disappointing start to what became a rambunctious spell for the club, though Gannon’s side would turn things around a week later with a 3-0 victory in Wales.

Gannon certainly demonstrated an eye for a player during his short time at the helm, but less than six months later he would depart the club following a poor run of results over the festive period.

In the final weeks of Gannon’s time in North Lanarkshire, it became clear that the English boss had lost several of the more experienced players in the dressing room – with a number of them totally frozen out.

Supported by his assistant Archie Knox, Craig Brown quickly reintroduced Stephen Craigan into the starting-eleven, while Keith Lasley, Steven McGarry and John Sutton all came off from the bench.

Although the narrow defeat at Tynecastle was a disappointing start, it would be the last time Brown would suffer defeat in the league until late March – a run of 12 games without a loss – winning eight and drawing four.

Stuart McCall’s successful time at ‘Well began in unremarkable style as his side played out a drab goalless draw on New Year’s Day 2011.

Chances were few and far between, though Dougie Imrie could have won it for the hosts in the dying minutes of the match.

McCall would not have to wait much longer for his first win, that came eight days later as Motherwell romped to a 4-0 victory at Dens Park to begin their Scottish Cup campaign in style and under the former Bradford boss,they would go all the way to the final – coming up short against Celtic.

Ian Baraclough picked up a vital win in his first game in charge of Motherwell – defeating St Mirren to move six-points clear of the Buddies at the foot of the Premiership table.

Stephen Thompson was sent off after 19 minutes, but it was Saints who looked the more likely to break the deadlock.

It took 72 minutes for the first goal to arrive and it was from familiar source – John Sutton sliding in to turn Josh Law’s cross into the net.

It was a good start but the struggles at the bottom of the table continued under Baraclough – culminating with a 6-1 aggregate victory over Rangers in the play-off securing another year of top-flight football.

The return of Mark McGhee as manager garnered a mixed response from Motherwell fans and he was unable to mark his second spell with a victory against Celtic.

Nadir Ciftci scored the only goal of the game and poor finishing was all that prevented the margin of defeat from being more emphatic.

McGhee’s starting line-up was certainly a statement with regulars Lasley, Lionel Ainsworth and Scott McDonald all on the bench.

Taking over with the team in tenth spot, McGhee managed to steer his charges well clear of relegation – finishing the season in fifth.

Arriving in the heat of a relegation battle, it was imperative Stephen Robinson got off to a strong start after making the step up from assistant into the managerial hotseat and he did so courtesy of a gritty display at Rugby Park.

Kris Boyd had opened the scoring, but Carl McHugh smashed home the equaliser before Zak Jules nodded home the winner – moving the ‘Well out of the play-off spot.

Robinson would guide the team to safety and would go on to be one of Motherwell’s most successful managers in the club’s history.

He left Fir Park in December 2020 and was replaced by Graham Alexander shortly afterwards.