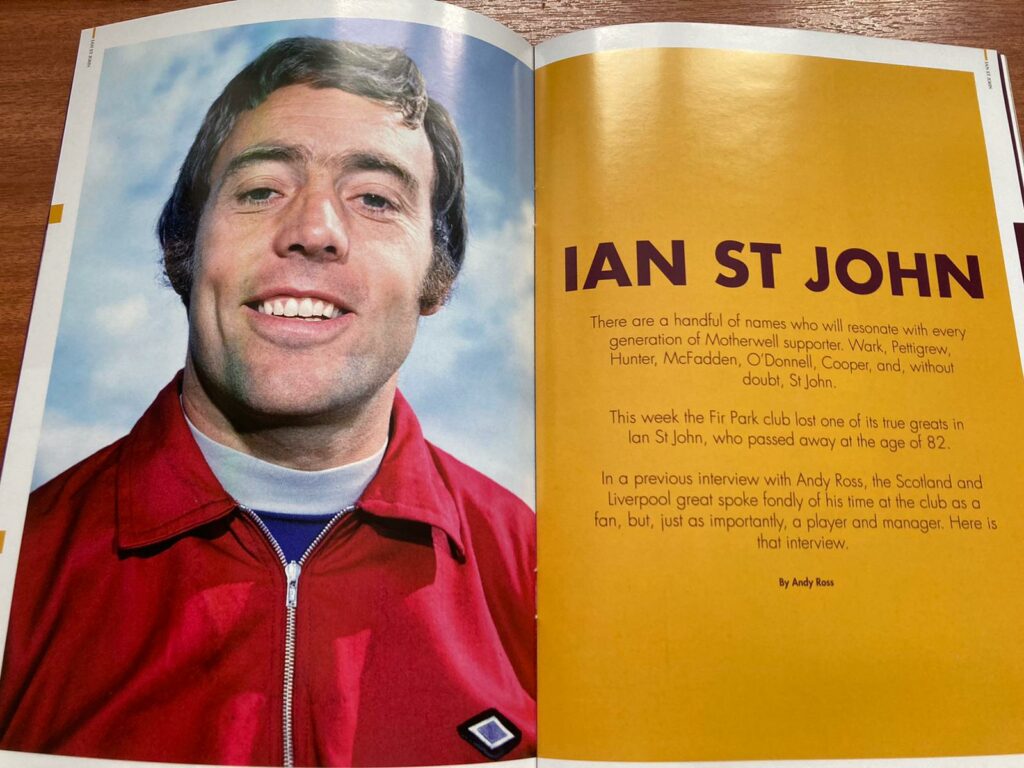 “The first result I look for is the ‘Well result and I’ve always done that.”

Over 50 years have passed since Ian St John dazzled the Fir Park crowds as part of the famous Ancell Babes, however his support for his boyhood team remains. Now 81 years old, the enthusiasm that emanates from St John at the mere mention of Motherwell is quite remarkable.

Growing up following the Steelmen, he was part of the 136,274 crowd that watched ‘Well defeat Dundee 4-0 to lift the Scottish Cup in 1952 and he would go on to make his debut for the club five years later.

“From a very young age I was a Motherwell fan,” St John explained. “I was lifted over the turnstiles and then when I was big enough, I climbed over the wall at the back, so I think I owed the club some money.”

What St John believes he owes Motherwell in money, he undoubtedly paid them back in goals. He scored 80 times in 113 league appearances in claret and amber and was part of some incredible displays.

Fans of a certain vintage still belt out the songs about the time the ‘Boys in Blue’ (Rangers) were turned over 5-2 at Ibrox by the boys in ‘Claret and Amber’ (Motherwell) and then what about the League Cup fixture against Hibs two years earlier in which St John netted a hat-trick in just over two-and-a-half-minutes?

“It was a special team, with terrific players in it,” he said of Bobby Ancell’s side. “Sometimes a football club can just get a team where it just happens for them.

“Certain styles gel and we were all small players, I don’t think any of the forwards were bigger than five foot eight, so we obviously played the ball on the ground and played tricky, passing football.

“We had two wing halves as they called them then in Charlie Aitken and Bert McCann, they were both class players and we got great support from them.

“It must have been good to watch and it was certainly great to play in.

“We really enjoyed it and could beat most teams, to be able to go to Ibrox and be able to beat Rangers who were the big team in Scotland at the time and beat them 5-2 was incredible.”

There is no doubt the Fir Park fans certainly enjoyed the football, crowds of over 30,000 regularly flocked to the stadium to see Ancell’s famous team. However, to the surprise of nobody but St John, his rapid hat-trick has yet to be repeated.

“Oh has nobody beaten that yet?” he laughed. “That’s not bad eh? I’ve still got the record – that’s good!

“The crowds at Fir Park were very good then, I think we missed a trick there; we should have been on a crowd bonus.”

Remarkably, while performing great feats in front of captivated crowds, St John was working full-time. It couldn’t be further removed from the realities facing top players in the modern day and he confesses the training facilities weren’t exactly up to standard.

“Most of us were part-time; I was still working in the Bridgeworks before going full-time when I was 21,” he recalled. “I worked at the Bridgeworks to stay out of the army; due to the conscription coming into effect when you turned 18.

“I hated working, but football wasn’t working for me, it was fun and it was enjoyable – I loved it.

“Those were strange days when you think back, I would think that most teams back then would have been part-time.

“You’d work during the day and then go to training at night.

“During the winter months it was obviously dark and we weren’t allowed on the pitch for fears that we’d carve the pitch up.

“Two lights from the car park behind the stand provided us with enough light for running around the pitch and then maybe a game of five-a-sides.

“When you compare it to the modern game, it’s like caveman times.

“Thinking about what we went on to achieve in the game and most of us going on to become internationals is incredible with that sort of training behind us!

“That being said it was just such a great time, we were all developing as players, it was great fun and exciting.”

After four magnificent years at Fir Park, football royalty came a calling. Liverpool boss Billy Shankly made the trip north to secure the signing of St John and he did in quite some fashion.

“He travelled up to collect me in the chairman’s Rolls Royce, the locals thought the Queen had arrived,” St John joked. “I was very fortunate in going to Liverpool, as the manager was different class.

“He was very different to Bobby Ancell, who was a quiet man.

“Billy Shankly was the world’s greatest talker when it came to football and a great motivator.

“I believe he was the ideal man to go to when you were a young player and he made you a better player.”

Success at Anfield quickly followed for St John, with Liverpool emerging from the second tier of English football to becoming a real force in European football.

After promotion to the top flight, the Reds would lift the First Division title in 1963-64 and again in 1965-66. He was also part of the Liverpool team that lost out 2-1 to Borussia Dortmund in the final of the Cup Winners Cup at Hampden in 1966.

“We won the Second Division and then that was us in the big time where we were very successful,” he recalled. “European football followed and all the fixtures against the cream of Europe.

“It was a wonderful rollercoaster ride for me; I couldn’t have wished it any better, to play for my own hometown team and then go on to Liverpool.”

In 1973 after rounding off his playing career at Tranmere Rovers, St John returned to Motherwell, this time as manager.The old place had not changed much, but he did manage to make some improvements to the training – much to the despair of the groundsman.

“They had put two or three more pegs in the dressing room, other than that the club hadn’t changed,” St John added. “I did get the players on the pitch for training, much to the pain of the groundsman – the park was his pride and joy.

“We were still a small team, punching above our weight, when I went back it would have taken a lot of money to buy players and get up there and Motherwell didn’t have that available.

“We had to bring through young players, as we didn’t have the money to buy and pay players.”

Charged with the task of bringing through youth prospects, St John handed a debut to young striker Willie Pettigrew. He also brought another striker in Bobby Graham back to Scotland from Liverpool and together with Pettigrew they would go on to form one of the most famous strike pairings in the history of the football club.

“Bobby couldn’t get a regular game, but he could play, it was a great move bringing him back to Scotland,” said St John, who would move on to manage Portsmouth after a year at Motherwell. “They managed to form a partnership and people still talk about them to this day don’t they?

“Bobby was a lovely player and Willie would score goals, if you can get a partnership like that at any team then that will do you.”

Though he admits the game in 2019 has changed to almost unrecognisable levels from the one in which he played in, those changes have done little to defuse Ian’s passion for the game. And he can’t hide his pride when quizzed on a Scottish star lighting up Anfield right now.

Andrew Robertson has climbed the ranks from a youth at Queen’s Park to playing a starring role for Liverpool in the Premier League and Champions League. Last year, the left-back was also handed the captaincy of the Scottish national side.

“Funnily enough I was with him the other day, doing a thing for Liverpool T.V,” he smiled.  “I had never seen behind the scenes at Anfield since I’d left, it was a real eye opener for me to see the training ground and the wonderful facilities they’ve got.

“We had a laugh and a joke; he’s really making a name for himself that kid.

“This is a huge change from the days where I went from Motherwell to Liverpool.

“When I joined the club we had one or two Scottish lads in and around the club, being Scottish back then was regarded as being foreign.

“Bill Shankly would add Ronnie Yates and Billy Stevenson, so we built a good Scottish contingent at Liverpool.

“Now you can sign players from all over the world as clubs can afford to do so.

“Liverpool had a lovely player in Coutinho from Brazil, who moved to Barcelona.

“I never thought in my lifetime that I’d see Brazilian’s play for Liverpool, but now we’ve got three or four of them.

“It’s fantastic, when I was a young player, Brazil were the team that everybody loved.

“They were always the class players, different from the rest.”

Now residing in Liverpool, St John was inducted into the Scottish Football Hall of Fame in 2008 and to the Former Players Liverpool Hall of Fame in 2015. With the Reds firmly involved in the hunt for their first Premier League title in 29 years, the man affectionately known as ‘the Saint’ is hoping Jurgen Klopp’s side can end the drought.

He also explained that while he is hopeful of seeing one of his former club’s achieve success, his boyhood team are never far from his thoughts.

“Former players at Liverpool are baffled to read that we haven’t won the league for 29 years,” he considered. “It beggars belief that, but this group we have now and a class act manager in Jurgen Klopp – if all goes well then hopefully they can do it.

“Over the years we’ve dominated Europe and had some fantastic teams.

“After a game on a Saturday, the first result I look for is the ‘Wellresult, I’ve always done that and that will never change.”