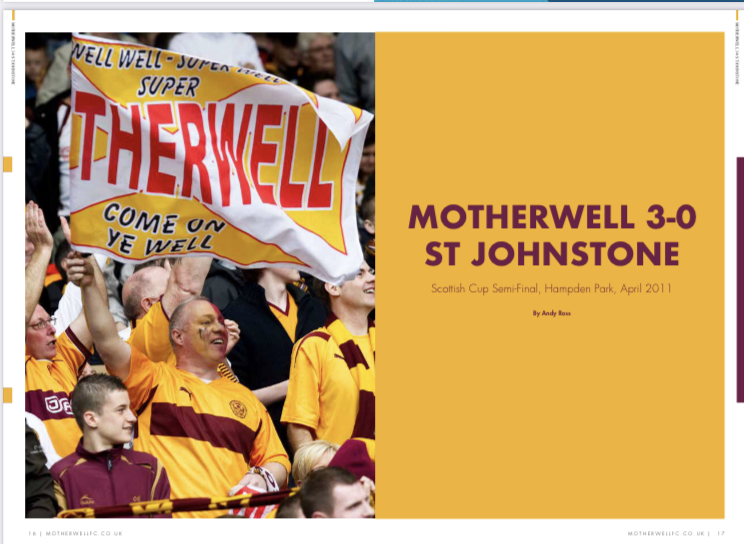 “It does feel a little while ago now I suppose, time flies by and you think of all the things that have happened since then, but I still remember the game really well.”

It was almost 10 years ago that Motherwell travelled to Hampden for only their second Scottish Cup semi-final in 20 years and their first in the competition against a side other than Celtic or Rangers since 1975.

The Steelmen were enjoying a superb cup adventurewhich began with a 4-0 success at Dens Park over Dundee and was followed up by a comfortable 2-0 win at Stranraer to book their quarter-final place.

In the last-eight, Scottish Cup holders Dundee United provided the opposition and the first encounter at Tannadice ended in a thrilling 2-2 draw, though Motherwell would advance after a spectacular showing under the lights at Fir Park in the replay – sweeping Peter Houston’s talented outfit aside and emerging 3-0 victors.

In the semi-final they would take on St Johnstone, who had recorded victories over Hearts, Partick Thistle and Brechin City to move within two wins of their first ever Scottish Cup triumph.

John Sutton had scored at each stage of ‘Well’s journey to Hampden and he recalls a nervous start for Stuart McCall’s men, who were contesting their second semi-final of the season, having lost 2-1 to Rangers in the League Cup a few months earlier.

After just 90 seconds, St Johnstone striker Danny Invincible got on the end of Danny Grainger’s cross and Darren Randolph had to produce an acrobatic stop to avoid a disastrous start for the Steelmen.

“We got off to a bit of a sticky start funnily enough and we weren’t playing great,” Sutton recalled. “You couldnot have really predicted how it would have gone from the opening minutes of the match.”

Having overcome a nervous start, Motherwell won a corner – presenting a chance to alleviate some of the early Saints pressure.

Tom Hateley flighted the ball across and St Johnstone keeper Peter Enckelman raced from his goal to try claim it. The Finnish stopper got it all wrong however, and Stephen Craigan was on hand to nod the ball into the empty net.

It was a sweet moment for the Steelmen captain who was riled by the shouts from the Saints coaching teamto ‘let him have the ball’ any time he received it in the early stages and his celebrations left the doubters on the opposition bench in no doubt how much it meant to the Northern Irishman.

“I was glad it was on his head and not his foot,” Sutton laughed. “I remember the coaching staff from St Johnstone instructing their players to leave Crags(Stephen Craigan) on the ball and it was really annoying him.

“When he scored the goal, it is fair to say he got pretty excited by the whole thing, it is very unlike him to score and if you were looking for a good omen then Crags scoring is probably about as good an omen as you willget.”

A crowd of 11,920 meant that Hampden was less than a quarter full, but the ‘Well fans were making a noise that defied their numbers. They had a dream of a cup final and their heroes on the pitch moved one step closer to making it come true when they doubled their advantage on 14 minutes.

Jamie Murphy picked the ball up and drove at the Saints defence before unleashing a powerful low drive beyondEnckelman and into the bottom corner.

“Murph (Jamie Murphy) has the ability to just glide past people, Keith Lasley used to refer to him as ‘snake hips’,” he added. “The big pitch at Hampden and the good surface that day really suited him.”

“The second goal was really important and gave us a bit of breathing space.”

Everything was going perfectly for McCall’s men who travelled to the National Stadium on the back of two wins and a draw in their previous three leagueencounters, however they had demonstrated their inconsistency throughout the 2010/11 campaign and there was a real unpredictable element when it came to both performances and results.

On this occasion, the men in claret and amber were showing their class and six minutes before half time they all but sealed their place in the final.

Francis Jeffers’ knockdown found Sutton who smashed a wonderful volley beyond Enckelman from 35-yards out. There were a few question marks over the Saints keepers positioning, but it was a sensational goal to continue the Englishman’s Scottish Cup hot streak.

“It was one of the Jubulani balls that got a bit of fame at the South Africa World Cup in 2010,” he remembered. “They did fly away a bit in fairness and they were different from the Mitre’s that you played with on a Saturday.

“I took the keeper by surprise a little, I hit it quite well, though some will say that was an obvious error – I think the Crags’ one is the one he’ll look back on and think that he could have done a lot better with.

“I liked playing with Franny (Francis Jeffers) up front, he was a good guy as well.

“He laid it off nicely and I caught it well with my left foot, you think at that point there is a decent chance, I could have hit it ever so slightly more in the corner and given the keeper no chance, but it was still in the top corner.

“It was fantastic when it went in, an amazing feeling to score at Hampden and especially when you are used to travelling with Keith Lasley who bobbled one in against Rangers with a cheap pair of boots in the previous semi-final.”

Leading 3-0 at half time it was inconceivable that Motherwell could squander their final place from such a position of strength, though many of those of who have followed the men in claret and amber for a long time were understandably nervous – it would not be the first time that defeat had been snatched from the jaws of victory.

On this occasion there would be no such collapse, indeed there was barely any nerves during anuneventful second 45 minutes, though Murray Davidson did see a late header crash off the crossbar.

The 20-year wait was over, Motherwell had clinched their first Scottish Cup final place in emphatic style.

Sutton recalls a number of high scoring matches during his two spells at Fir Park in which ‘Well battled back and times where they were unable to preserve their lead, so admits the team were taking nothing for granted.

“We had played in games previously like the Hibs game where we were 6-2 down and battled back, so you can’t be too complacent,” reflected Sutton. “Of course, you’d much rather be 3-0 up than 3-0 down going into half time.

“There have been times where we have shot ourselves in the foot, so it was unlikely for it not to go 3-1 or maybe even 3-2 to make it that bit nervier.”

The elation among the ‘Well fans was evident on the full-time whistle and after making their way back to North Lanarkshire many toasted success for their heroes.

Sutton recalls the scenes as the team bus made its way up Airbles Road and the Electric Bar seemed to empty en masse as supporters brought the traffic to a standstill to show their appreciation for the team.

“It was brilliant seeing the supporters spilling out the Electric Bar to applaud the team bus, you just think ‘wow, that’s how much it means to people’ – it was a really nice feeling,” he smiled. “I always say that Motherwell was fantastic and the people that were there great too.

“We were always written off and told we weren’t that good most years, but we proved them wrong many times – it was a great time to be a Motherwell player.

“It was a good team; I was blessed to play with a number of good players and meet some really good people as well.

“I think Motherwell have been unfortunate to an extent, people are always tipping them for top six and they have always punched above their weight.

“It is just a shame we haven’t went on to win a trophy, you look at the Betfred Cup this season and full credit to Livingston and St Johnstone, though neither side have had to play Celtic or Rangers to get to the final.

“Hopefully in the near future the Scottish Cup will be kind to Motherwell and it would be absolutely brilliant to see them go on and lift the trophy.”