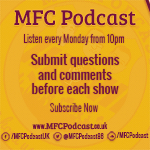 On the 25th anniversary of Motherwell’s historic Scottish Cup win in 1991, Sparra was joined by goalkeeper Ally Maxwell who discussed his heroics on that memorable day at Hampden, his eleven year career at Fir Park, his departure from the club in 1992, returning to Scotland for this year’s anniversary and much more.