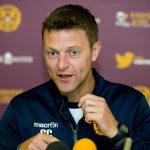 Sparra sat down with Motherwell legend Stephen Craigan to discuss his career at Motherwell. We discuss being released in 2000, his return to the club, cup finals, the drama of ‘Helicopter Sunday’, European adventures, his relationship with Jim Gannon, taking up the role of under-20’s boss at Fir Park and much more.

Recorded at Fir Park as the players headed for a few well-earned days off, there is some background noise during this episode – the excitement was evident!