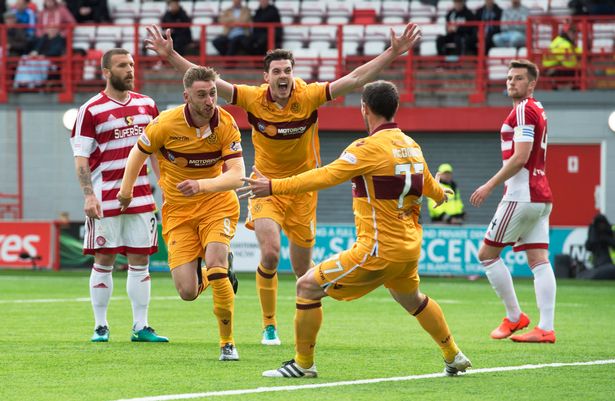 Motherwell and Hamilton will go head-to-head for crucial Premiership points this afternoon in the 150th meeting between the two sides. A rivalry going back over 130-years, we look at the history of the rivalry between Accies and the Steelmen.

The first ever meeting between Accies and ‘Well took place 133 years ago in 1888 and would come in the Scottish Cup, a competition which was becoming increasingly competitive following a spell in which Queen’s Park ruled the Scottish game.

Incredibly, it took until 1875 for the Spiders to concede their first ever goal and it ended their run of eight years without concession. Such was their dominance they would be invited to take part in the English FA Cup and on two occasions they reached the final – losing to Blackburn Rovers in 1883/84 and 1884/85.

The first three Scottish Cup competitions all went the way of the side from Hampden Park, before Vale of Leven stepped up as challengers and lifted the trophy three years in succession between 1877 and 1879.

By the time Hamilton and Motherwell entered the Scottish Cup, Queen’s had managed to lift the trophy on eight occasions, though the emergence of teams such as Hearts, Hibs and Rangers was beginning to threaten their stranglehold on the game.

166 teams entered the 1888-89 Scottish Cup, 17 of which were based in Lanarkshire. As well as Hamilton Academical, Hamilton Wanderers also took part alongside the likes of Carfin Shamrock, Royal Albert and Wishaw Thistle.

Hamilton began their Scottish Cup campaign with a thumping 5-0 victory over Lanarkshire rivals Airdrie, while Motherwell were held to a 3-3 draw at home to Royal Albert meaning a replay would be required.

There were several eye-catching results at this early stage of the competition including the 16-0 victory for Kelvinside Athletic against Govan Athletic, Cowlairs defeating Temperance Athletic 18-2 and Dundee Our Boys coming out on top 5-4 against Dundee East End.

Motherwell defeated Royal Albert 2-1 in the replay played in Larkhall to book their place in round two and it would be there where they would face Hamilton for the first time. The game took place on 22 September 1888 at Dalziel Park and it was the Steelmen who would book their place in the next round with a resounding 5-1 triumph.

A 6-2 defeat at home to Dumbarton ended ‘Well’s hopes in the next round and eventually it would be Third Lanark who would go on to lift the trophy – winning at the second time of asking in strange circumstances.

The first match ended 3-0 to Third Lanark, though due to the ‘unplayable nature’ of the pitch a replay was ordered, though not to be denied they would come out on top again winning 2-1.

Records show it was over 10 years until Hamilton and Motherwell would play each other again, with a 3-3 draw in 1898 followed by a run of three wins and a draw for the Accies – leaving the boys in claret and amber without a win in almost 13 years by the time they won the derby 4-2 at the beginning of 1901.

In 1899/1900 and 1900/01, the Lanarkshire Football League was created as a supplementary competition to help increase the number of games for Scottish league clubs.

Information on the Lanarkshire League is scarce aside from Motherwell winning the trophy in its inception year and Albion Rovers claiming silverware the following season. Alongside Airdrie, Hamilton, Rovers and ‘Well, Carfin Emmett, Royal Albert, Wishaw Thistle and Wishaw United completed the league.

1906 saw Hamilton defeat Motherwell in the Scottish Cup for the first time, winning at Fir Park 3-2 and they also would claim promotion to the First Division that season to set up the first top-flight encounter between the two Lanarkshire rivals.

It was Motherwell who would comfortably win the first match between the two in the top division 3-0, but Accies turned the tables in the next meeting and came away from Fir Park 2-0 victors. Hamilton finished that campaign bottom, while Motherwell finished tenth in an eighteen-team league.

Quite like in their modern-day encounters, neither team could get a stranglehold on the derby and wins were exchanged through much of the next decade, though a 2-1 success for Hamilton in August 1924 saw a major momentum shift, though not in the direction they would have hoped.

Motherwell would go on to win 19 and draw four of their next 23 meetings with Hamilton – recording a 6-0 and two 5-1 wins during their dominant spell against their rivals and during this time they would become the Scottish champions for the only time in the club’s history.

The run was ended in emphatic style when Hamilton hammered ‘Well 6-1 in the New Year’s Day fixture in 1935 and the teams continued to face each other during the second World War in a variety of competitions including the Summer Cup in which Motherwell recorded their biggest win in this fixture – an 8-0 drubbing in June 1944.

In the seven post-war fixtures, Motherwell won four and drew on three occasions. Four of the matches took place in Scottish Division A, which was the name by which the top league went by following the war and there were three matches in the Scottish Cup.

After being such familiar foes since formation, it was unusual that a year would pass without a meeting between Accies and ‘Well, though following the 4-1 Scottish Cup victory for the Steelmen in February 1951, it would be over 14 years until the teams would next meet again.

It was the Fir Park side who would come out on top in that Division One encounter and by the time that Hamilton defeated ‘Well 2-1 in the League Cup in 1968, it had been 29 years since they had claimed success in the derby outside of war time competition.

The three meetings in the 1968/69 season where Bobby Howitt guided Motherwell back to the Premier League as champions would spell another decade without a derby fixture between the teams.

They would however be much more familiar in throughout the eighties where both competed in Division One until Motherwell were promoted in 1984/85 and Hamilton followed suit the very next season.

Accies were relegated in 1986/87, though they bounced back the next season only to face the drop again at the end of the 1988/89 campaign. Despite this, there was not much to separate either team throughout the eighties – though a miserable time was about to follow for the team in red and white.

During the nineties, financial insecurity caused havoc for Accies, they sold Douglas Park in 1994 and would groundshare with Albion Rovers and Partick Thistle during this time. In the 1999/00 season they were unable to fulfil a fixture as their unpaid players went on strike and a 15-point penalty saw them relegated to the bottom tier of the Scottish game.

Despite their woes, they still would prove to be a challenging opponent for Motherwell however, almost stunning the Premier League outfit when a José Quitongo inspired Accies side drew 1-1 at Fir Park before going down 2-0 in the replay – these were the only two occasions the teams squared off during a difficult chapter in the South Lanarkshire sides history.

After moving into their new stadium in 2001, Hamilton began to make strong progress on the pitch and by the time they visited Fir Park in the League Cup in 2005, they were back in the First Division and harbouring hopes of top-flight football. On that occasion it took a last-minute winner to send the Steelmen through, but the positives were there for Billy Reid’s men.

Accies achieved promotion to the SPL after winning the 2007/08 First Division title and they marked their arrival by dumping ‘Well out of the League Cup after a 2-1 extra-time victory at Fir Park in a fiery encounter in which Chris Porter and Simon Mensing both saw red.

Motherwell won three of the first four league meetings between the teams, though a James McCarthy double in December 2008 earned Accies a significant 2-0 win – their first over ‘Well in the top-flight since 1989.

After two seasons at the top table of the Scottish game, Hamilton were relegated, though again demonstrated their abilities to bounce back as they gained promotion after defeating Hibernian in a remarkable play-off.

Most of the 2014/15 Premiership campaign will be one to forget for ‘Well fans, but Accies supporters will continue to revel in a season in which they knocked their rivals out of the League Cup, won 4-0 at Fir Park and recorded a 5-0 hammering in the New Year’s Day fixture – though Motherwell did gain slight revenge with a 4-0 success against Accies during that season.

Since then both teams have remained in the top division and have faced each other with the regularity that they did following their formation back in the late 1800’s.

Motherwell have enjoyed a few convincing victories and knocked their rivals out of the Scottish Cup in 2018, though Accies have only failed to register a win over Motherwell in one of their six successive seasons in the Premiership and travel to Fir Park today on the back of three wins and one draw in their last four matches with the Steelmen.

It will be frantic; it will be passionate and yet another chapter in a rivalry that continues to prove a significant part in the history of both Hamilton and Motherwell.