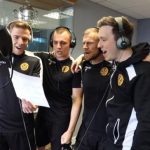 Just over 24 hours ahead of the 2018 Scottish Cup final, Sparra and Derek Watson talk the fantastic success of the Banter Thiefs top 20 single ‘Up The Well’, further preview the big game at Hampden, Chris Cadden’s Scotland call-up and more. 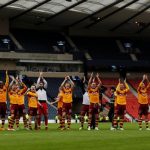 A question that my group of Motherwell supporting mates quite often ponder, whether it be on the back of over celebrating a good victory in the early stages of a cup competition, a brilliant three points in the league, toppling one of the teams of bigger stature or even ensuring our status in the top-flight of Scottish football.

When Stevie Kirk nodded the ball into Alan Main’s net to secure the Scottish Cup for the Steelmen in 1991, I was too young to know what was going on, never mind soak up the build-up to the event, make plans for after the game, or indeed appreciate in any sort of way the magnitude of the occasion – a game that is widely regarded as the greatest Scottish Cup final of all time – just my luck that it came too soon for me!

It would be another 14 years until ‘Well next booked their place at a Hampden final, the 2005 League Cup final. At the age of 18, it was up until then, easily the most exciting experience following the club, we had won the semi-final in incredible fashion – defeating Hearts with the last kick of the ball in extra-time and there was a belief that our luck was in…until the game began.

Terry Butcher’s team were destroyed 5-1 against Rangers on a day where many who featured for the team have confessed that occasion got the better of them. During the build-up I somewhat naively had never had considered coming off second best, never mind losing by a four-goal margin, instead of sharing the moment where the team lifted the cup surrounded by more Motherwell fans than I had ever seen packed into the one stadium, I remained behind with the few who had resisted the urge to head for the nearest pub – the players walked up the famous steps with their heads slumped, clearly embarrassed at what had been a crushing defeat.

We had a night out afterwards, but it was much more drowning of sorrows, despite the achievement of reaching our first final in 14 years, what had occurred on the day badly soured the occasion. I can recall sitting down to torture myself with the highlights the following day and my mum walking into the living room to me sitting with tears streaming down my face, I wasn’t sure if I wanted Motherwell to ever reach the big stage again if that was how badly a defeat hurt.

Fast-forward six years to 2011 and 20-years on from the historic success in 1991 the team had a chance to mark the milestone by lifting the Scottish Cup again. The evening before there was parties across the town, fans had travelled from far and wide to make sure they were part of the Hampden showpiece, but again the day would go far from how we hoped.

It began with a bus journey where the driver appeared to take issues with bus routes that were allocated to avoid the very scenario that would unfold. With kick-off just 10 minutes away we eventually opted to get off the bus which was crawling round the streets leading to the opposite end of Hampden from where our fans would be housed and into the pouring rain.

We missed the teams coming out and the fantastic display that went with both sides entering the field of play. The first sight that greeted me inside the stadium was an early Celtic effort coming back off the crossbar.

In truth it never at any stage on that day felt like we ever stood much of a chance, Celtic took the lead in the first-half and although we responded with Gavin Gunning’s shot rattling the crossbar after that it was a match dominated by Neil Lennon’s team. In the second-half Stephen Craigan would deflect an effort into his own net with 14 minutes remaining and Charlie Mulgrew’s free-kick put the finishing touches on what had been a rather dismal day. Time for another night out, without much of a reason to celebrate.

Again, it would be another six years until the team would find themselves in a national final and while the League Cup final in November 2017 brought another defeat to Celtic and a failure to find to the net, there was a totally different feeling at the full-time whistle.

Celtic went into the final on the back of an unbeaten run which spanned almost a season and a half, any challenge that they faced domestically they took on with what seemed like an element of ease, yet on that day at Hampden, Motherwell demonstrated no fear and went toe-to-toe with their opponents. Indeed, had it not been for a wonderful stop from Craig Gordon to keep out Louis Moult’s header or Craig Thomson’s ludicrous decision to award a penalty and send-off Cedric Kipre, who knows how the game may have unfolded – what was clear though was that Motherwell had shown up – it had taken 26 years, but it finally had happened.

By the time the full-time whistle went it was the ‘Well fans who could be heard, showing their appreciation for the spirit that their side had shown. The players could hold their heads high as they collected their runner-up medals too, they may have been beaten, but they were far from disgraced.

The number six has been prominent since that 2005 final, with six-year gaps between finals. This time though, the gap has been just six months and we are currently counting down to the Scottish Cup final. In what has been an incredible season for the Steelmen, manager Stephen Robinson has lead the team to finals in both cup competitions, beating a host of top-flight teams on the way.

We are now just three days away from what is just the third time the club have reached the Scottish Cup final in 66 years and for only the second time in their history can celebrate reaching two finals during the course of one season.

Claret and amber is on display throughout the town, local shops are showing their support and the fans have reached a state of fever pitch. With the football club now being under the ownership of the fans through the Well Society, there has never been a feeling of such togetherness between the club and supporters.

Again, we go into the game as big underdogs and for the third successive final, Celtic will provide the opposition, however this season has been unlike any I’ve ever experienced during my time supporting this magnificent club.

These feelings of excitement have been present prior to the previous three finals I have reflected on at length, but never have I felt the connection to the players and staff on these levels – only yesterday I had the opportunity to record a podcast with Stephen Robinson, which did nothing but heighten my excitement levels. In Robinson, Motherwell have a manager who is driven and determined to put in as many hours as possible to ensure the team and the football club is the very best it can be. He believes in his players and in turn they believe and respect him, he also understands and embraces the ethos of the football club, that has brought supporters and players closer together – a vital element in the success.

Given the size of the club, we can’t afford the big transfer fees or the big wage demands, what Robinson has done is assemble a team of hungry young players, who are willing to learn, work-hard and do their very best for the team every time they pull on a ‘Well shirt.

Having a bond between payers and fans may seem to some as a strange thing to describe such a thing as vital, however I don’t think it can be understated. As Motherwell supporters we don’t expect to win every game, we appreciate that times also quite often can be tough, even in the league campaign just completed there have been spells where results haven’t been good.

The difference this season is that due to the personnel brought in over the course of the two transfer windows by the management team, coupled with the sublime work done by the club’s media team to enhance that feeling of being ‘as one’, the majority of the fans feel totally assured that everyone is doing the very best they can for the club, there is an air of positivity in almost everything the club does – it’s near impossible not to get excited by it all. Anyone who isn’t convinced that the effort is what it should be, only needs to watch the team in action – they are a group of players who seemingly would run through a brick wall for the cause.

On the park, I’ve no illusions as to how difficult it will be to defeat Celtic, they are an incredibly strong team, but by the same token, I don’t foresee any possibility that the occasion with overawe anyone in claret and amber.

For me there will be no bus, that’s not an experience I’m quite ready to replicate, I’ll be travelling by taxi, with a day alongside family and friends ahead. I hope with everything I have that we can do it, it would mean so much to everyone with an association to this football club, these days don’t come around very often and it’s important to make the very most of it – we’ll get along early, we’ll sing our hearts out, meet with friends who have moved far away, but wouldn’t dream of missing our big day, we’ll laugh and maybe even shed the odd tear – whatever happens though, we’ll never forget the day whether the result be good or bad.

We’ll go together as one – players, staff and supporters – can you imagine what would happen if we won the cup? 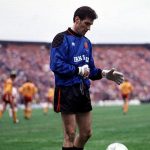 As we continue the build up to the Scottish Cup final, 1991 hero Ally Maxwell joins Sparra to countdown to the big day, look back on the season so far, discuss his involvement with the Well Society’s Exiles Club, look ahead to the Scottish Premiership fixture with Hamilton and much more.